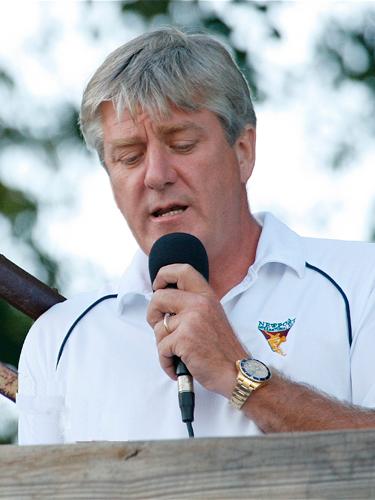 In the spring of 1992, an invitation went out to the governing body of polo in England, known as Hurlingham.  That invitation came from a polo club in the US that hadn’t held an international polo match in over 100 years; from a club that didn’t even have a polo field built at the time.  It came from the Newport International Polo Series as it organized its inaugural season.

William Crisp answered the call.  He was the highest rated amateur player in England and the captain of the English team that came that year.  William fell in love with Newport, and more importantly he fell in love with his future wife, a lovely local debutante.

By the following season William had moved to the US and helped lead American teams through an undefeated season of polo that summer.  William continued to play off and on over the years, and decided on umpiring, until we discovered his talent for commentating.

His experience in playing the game, coupled with his biting English wit and sense of humor make him a formidable pundit and the omniscient nightmare of players who miss penalty shots.  With colorful trivia and unbridled enthusiasm, he adds a contagious dose of entertainment for our audience.

William and his wife Lowie have hosted visiting teams as far away as Australia and perennially host the English team when they make their annual Labor Day visit.

“Having William as our commentator is the icing on the cake.  I feel like he never hung up his boots and is still playing there right beside me, ribbing me, challenging me, never letting me live down a missed penalty, and raising a hoot for a good play.”

We salute William Crisp with the 2009 Silver Pony Award for his contributions and commitment to the Newport International Polo Series.