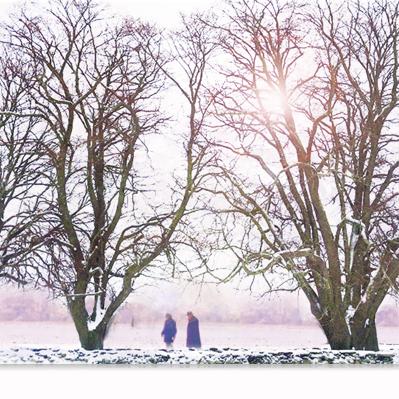 Take a journey to 1992, a heady year with change in the air.  The Winter and Summer Olympics loomed large, (it would be the last time both games were held in the same year), silicon valley giants were rolling out revolutionary technological changes as the 'world wide web' (aka the internet) prepared to go public, social unrest reached a new peak in the US, the cold war was officially declared over, the EU opened its horizons to the rest of the continent, pop artists were wearing clothes backwards, and US presidential power was about to change sides. Thus was the year that ushered in the Newport International Polo Series.

Unsettled winds of change gusted over Glen Farm in February of '92, foreshadowing not only the coming of an early spring but also the forces at work in the alliance of two men, lifetimes apart, who found a common pioneering spirit and a positive, resourceful nature for their confluence of purpose in what polo could bring to the community.  One, a young man at the beginning of his dream to revive the sport of polo in its American origins; the other, a seasoned business retiree whose later life included volunteering through Rotary.

While Dan Keating strategized the complexities of his inaugural public exhibition series of international polo matches only months away, Jack Leavitt was plotting a course to multiply the modestly successful first polo fundraiser that he and Keating co-hosted in the Fall, by rallying a committee of fellow Rotarians and earmarking the otherwise sleepy month of February for the kickoff of the Rotary's ad sales campaign to fill a program booklet they intended to distribute for the 2nd annual Newport Rotary benefit polo match in May and another match later in the season.

The genesis of this prolific relationship occurred 6 months prior, when Leavitt attended a promotional Celebrity Polo Match that Keating held during the summer of '91, where Frank Stallone (Sly's dad) and Mickey Dolenz of the Monkeys were among the advertised headliners who caught his attention. Leavitt was hoping to enjoy a match like those which he and his wife discovered in Saratoga and Chicago, where his naval and business careers had steered him.  As he delighted in this new attraction in Newport County, the idea struck Leavitt for a benefit match, as a fresh opportunity to create a community event to fund the Rotary Club's charitable initiatives.

Leavitt's subsequent proposal was readily embraced by Keating, who offered to host the match at no charge, leading to a swift approval by the Rotary Club, and 7 weeks later, the first Rotary Benefit Match took place in the Fall of '91, with 33 fellow Rotarian volunteers collecting ticket sales at the gate, selling food and beverage concessions, and ads in a small program booklet to cover the cost of conveniences.  Keating contributed the manicured venue, PA system, players, horses, grooms and umpires.  A good time was had by all, and the day was deemed a successful beginning, hence a new agenda would ensue for Rotarians, come February.

And that's how, flanking the inaugural matches of the Newport International Polo Series in the summer of '92, the 2nd annual Rotary benefit match took place in May, just before the Series launched, and another one followed in the Fall, after the Series concluded. The cycle would repeat each year, thereafter.  A few years in, Leavitt struck a strategic alliance with the local daily newspaper, through which the Rotary Club's program booklet made a quantum leap, with professional production and distribution to a County-wide subscriber circulation.  In 1995 Keating decided to suspend his own publication in favor of the Rotarian's efforts, making it the Official Season Program of the Newport International Polo Series, where it is read by annual audiences of up to 80,000 spectators in recent years.

Currently Newport Polo is hosting a Sweepstakes for the selection of the 30th Anniversary Cover of the 2021 season program.  The editorial content, which is furnished by Newport Polo, serves as an insider's guide to polo in Newport, for everyone from newcomers to seasoned fans, featuring a summer chock full of exciting events and best of Newport County.  The full-color magazine will reach tens of thousands of readers throughout the summer, distributed at the matches, local hotspots throughout the County, and on newsstands as a supplement to Newport This Week. (Season Program covers since '92)

100% of the ad sales revenue from the Season Program, plus the gate sales from the annual Rotary Benefit Match, have been a major source of funding for the Newport Rotary Club's scholarship program, raising hundreds of thousands of dollars over its history, to support college-bound high school seniors and many other significant charitable initiatives that endow the needs of the community.

Standing the test of time, the Rotary Polo Committee still comes to order each February to kick off its ad sales drive, and the Rotary Benefit Match has remained an annual fixture in the schedule for the past 30 years, with scarcely any changes to the successful handiwork of two unlikely collaborateurs.  The date of the Rotary Benefit Match remains at the start of the season, when locals are long overdue for an afternoon picnic outdoors at the polo grounds to start the summer, in the proud New England tradition of shorts & flip flops with woolen sweaters or parkas, if necessary.  Eager players are waitlisted for a coveted roster position to be the first on the pristine international field.  The Rotarians have streamlined their operation, selling admission tickets in advance and at the entry gates on the day, while Newport Polo manages the labor, licenses and conveniences, and invites the professional services of gourmet food trucks and bar management, establishing a successful formula that has been in use ever since, multiple times each season, to support dozens of other local nonprofit organizations each year.

Under Keating's direction, Newport Polo and the Polo Club prioritize involvement in the community, sponsoring special events and charitable initiatives beyond the benefit matches, to include an annual International Polo Charity Ball, food & emergency relief drives, and ticket donations for the Newport International Polo Series.

Leavitt and Keating were both individually named Paul Harris Fellows, which is Rotary International's highest recognition, and Leavitt became the first inductee into the Newport Polo Hall of Fame.  An active Rotary Club comprised of business professionals that volunteer their "service above self" carry on Leavitt's legacy, while he enjoys each new edition of the Season Program, cover to cover (with a lifetime subscription) from his Maryland home.

Time Machine is a 30th Anniversary retrospective series. We hope you enjoyed the trip in time to 1992, our inaugural year. To read additional Time Machine chapters published this year, visit Headlines.