A Wrap on Arena Season 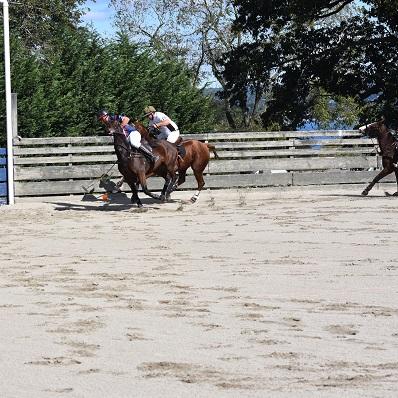 As the first snow falls here on Aquidneck Island and the temperature settles to winter levels, a hush befalls the farm as we reflect on the successes of a lessor known but vital league of polo offered here at America's First Polo Club - the Autumn Arena Polo Season - where the outdoor training center has been abuzz 6 days a week for the past 10 weeks, after the close of the grass polo fields for the year.

While Arena Polo doesn’t have the same glitz and glamour as the summer Polo Series with its cheering fans and prestigious sponsors, it provides an exciting continuum of outdoor sport with interclub polo tournaments among competitive players in the Northeast circuit of polo clubs, and espouses the intercollegiate and interscholastic polo forums, and is also the starting point and a foundation for aspiring new players here in the Connecticut-Rhode Island-Massachusetts corridor.

Meanwhile two Club tournaments welcomed a mix of enthusiastic veterans and eager rookies to compete side by side in friendly competition. Our annual Players Cup was a riveting weekend, including shootouts and close-scoring games with our Club's best players, plus an elegant awards banquet, resulting in a win for The Firm.  In the 10th annual Thanksgiving Cup, the Club's Rookie’s of The Year rose to the occasion with skills they honed over the last year, in their debut alongside professional/certified polo instructor, Minnie Keating; but it was the Galloping Grooms, a team of all interscholastic players from Newport that took home the trophy, making Club history as the first interscholastic team to win a Club tournament.

The Newport Varsity Girls are on a role with a 2-1 record at home, with additional qualifying away games looming through January to prepare for a succession of tournaments that culminate the annual intercollegiate and interscholastic polo programs organized by the United States Polo Association.  Also the host of Brown University's polo club, the Men's team posted a 1-1 record, with a road win against Harvard, and home game loss to Yale.

Weekly club chukkers under the lights and on weekends, and adult lessons 2-3 days each week for newcomers, including players from the Naval War College Polo Club, rounded out the succession ofactivities at the outdoor arena over the past few months, where camaraderie and sportsmanship were a highly compatible mix. BBQs and toasts around the fire with rivals and supporters, a whimsical Halloween scrimmage with players and ponies dressed in costume for a festive evening of polo, reminded us that while competition is exciting, everyone comes out to play the game of polo and have fun at the end of the day, finding encouragement for players of all skill levels.

One of the best parts of polo is the community. You are likely to see multi-generational family members or siblings in the arena playing with or against each other!  After polo, players, friends, and families linger to chat about favorite horses, strategy, and the next round of competition. Friendships are made as people from all ages and walks of life bond over this unique sport. The camaraderie created within the walls of the arena, away from the crowds of the exhibition matches, is what keeps players returning to the fall and spring arena seasons.

We wish the best of luck to our interscholastic and intercollegiate teams as the ponies and players get a well-deserved rest before spring brings us back to the arena, to get everyone in fighting shape for our 32nd season of the Newport International Polo series starting in June 2023.

Spring arena polo revival is the perfect time to try your hand at polo! Arena polo provides a safe and controlled environment for beginners to try the sport. Newcomers are given the chance to learn alongside other novice players and riders while getting individualized attention from our certified instructors. No riding experience is necessary, and equipment and horses are provided, making polo attainable and inviting for serious, athletic candidates to explore! Try your hand at arena polo this spring and learn more about Newport Polo’s 30-year polo school track record and step up program of training new players.