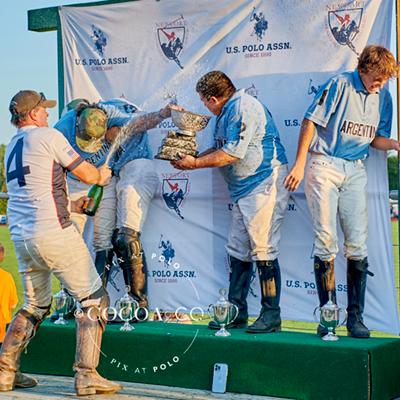 2022 arrived full of promise as the year started with breathtaking response to the Kia Ora Cosmic Ball (see 2022 Fundraising Benchmarks) and growing enthusiasm from fans who carefully laid their plans to embrace of summer of polo while plumbing the depths of winter.  Too soon after, we wished fair winds and following seas to Newport Polo's trusted consuliere since 1991 and inductee to our Hall of Fame, CMDR J.B. Leavitt. Still, season 31 was rising fast on the horizon and required a dedicated focus, buoyed by energetic players ready to dive headlong into spring training.  Our returning team of event day pros was matched by excitement of newcomers to support behind-the-scenes productions of the Newport International Polo Series. Colombia's opening day heralded an auspicious start to what became a record-setting season marked by a classic shining New England summer, perfect for fun in the sun.

The Newport International Polo Series 28th edition of its official Season Program found robust support from nearly 70 advertisers, mostly local businesses.  The annual publication is produced in partnership with Newport This Week and the Rotary Club of Newport which has received 100% of ad sales revenue since 1995 to fund its charitable initiatives.  Current Rotary initiatives include fundraising for Newport's Women's Resource Center to aid women and families escaping domestic abuse, and annual scholarships for local students.  Season program ad revenue was combined with ticket sales for the annual Rotary Benefit Match to provide the club's primary source of funding for its philanthropic efforts.

Newport Polo's 21st annual International Polo Charity Ball took off like a rocket to the moon as enthusiasm reached an all-time high with the Ballroom at capacity less than 24 hours after tickets went on sale.  The star-studded affair welcomed returning beneficiary, The Jeffrey Osborne Foundation, and Boys and Girls Club of Newport County, and celebrated the New Zealand Polo Team, embracing its culture, cuisine, and those famous southern lights for the Kia Ora Cosmic Ball, presented by BD.  Fervent bidding on silent and live auction gems, combined with attendee monetary pledges, and a donated portion of ticket sales revenue topped all previous Polo Ball fundraising records to surpass $125,000.  The money raised will directly benefit Rhode Islanders by funding programs that keep music and the arts in schools, and provide families in need with basic necessities including food and shelter.

Also topping the charts, Newport Polo's 6th annual All Charity Day broke its past records to include participation by 25 civic and charitable non-profit organizations whose collective fundraising surpassed $34,000.  The previous record was set in 2018 when fundraising surpassed $22K by 24 participating non-profits.  Born in Newport Polo's silver jubilee year (2016), the consolidated All Charity Day event allows Newport Polo to extend fundraising benefits to more participants and adds to the enjoyment of the day with a full venue and festive atmosphere that abounds for the Newport International Polo Series exhibitions. Details and registration for the upcoming year are announced annually in January in Newport Polo's Digital Magazine.

Colombia debuted as 36th nation to compete in the Polo Series with its June 4th debut.

New restroom trailer for the Tailgates and additional units added to each restroom location.

Supported the most number of active players out of 40 Northeastern polo clubs.

Graduated the 11th class of players from the annual summer Coaching League.