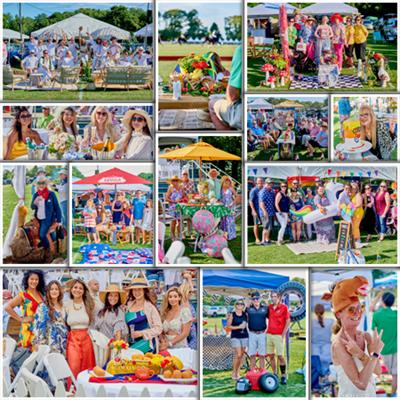 Nobody does it better than Newport Polo Fans!  The electric atmosphere and joie de vivre are tangible contributions of the enthusiastic audience that lines the field each Saturday, taking the tailgate tradition to new heights week after week.  The last leg of the journey down the canopy-lined driveway of Linden Lane on a warm summer afternoon gives way to the open vistas of BD Field and the excitement on display.  Three decades have witnessed increasingly elaborate spreads, fashions and hats to the nines, 5-star food and beverage menus, and decoration to cheer on the home team along with its rivals.  The love from the fans is felt by all who make their way across our field, and we want our fans to know that the appreciation is mutual.

During the season, our judges scour the sidelines each week in search of the most extravagant bacchanal to bestow our Best In Show laurels.  A special prize from Stella Artois is awarded to toast the standout group, along with a much-coveted moment of fame on the Brenton Hotel Jumbotron.  Weekly themes provide endless possibilities for hopefuls to detail their picnics with an eye on the prize.  Our resident photographer, Cocoa & Co, documents the creative contenders in the running to preserve every bit of the thought that is put into each ballyhoo.

Starting on November 30th, we are assembling the shining stars of 2022 to hand the final decision over to the most discerning judges, our fans, who will crown one ultimate winner as the Best of the Best in Show.  To see if your party is in the running and to cast your discerning votes, follow this link to the Vote for Joy Photo Album on the Newport Polo Facebook Fan Page.  One winner will receive the Grand Prize, a Cocoa & Co Mini Portrait Session of their choice.  Plus, all participants may claim their reward for voting.  Continue reading for prize information and official contest rules.

Voting: Tag yourself & share to earn more votes, if you are among the nominees!  Vote by Liking all your favorite entries within our album of finalists published on Newport Polo's Facebook fan page.  Likes only count as a Vote if on the photo within the Contest album; likes on posts/shares themselves do not count as Votes.  Voting is open from 2:00 PM (EST) on Wednesday, November 30, 2022 to 5:00PM (EST) on Wednesday, December 14, 2022.  Voting for multiple entries is encouraged!

Reward for Voting: Each voter will receive a credit of a complimentary Lawn Ticket for the Newport International Polo Series, redeemable online for the match of their choice. To be eligible for the reward, a voter must: a. be a Fan of Newport Polo's Facebook Fan Page by Liking the page (not the album); and b. Vote/Like at least one (1) photo entry in the Contest album. To claim the reward for voting, send a message to Newport Polo Facebook Fan Page. By participating, you agree to the terms and conditions of the contest, below.

Grand Prize:  One Grand Prize Winner will receive an exclusive COCOA & CO. MINI PORTRAIT SESSION for (choice of 1): Couple Session, Kids Session (up to 4), or Family or Group Session (up to 6). Two (2) hi-res photos & two (2) photo prints included. Sessions must be scheduled within 30 days of winner announcement.  To be eligible to win the Grand Prize, the winner must appear in one of the photos in the Contest Album and must tag themselves in the photo. The Grand Prize winner will be determined by the photo that receives the most votes.  Votes will be reviewed for authenticity, including only one vote for self.  Duplicate votes will be disqualified.  The winner will be announced on or about Thursday, December 15, 2022, on www.nptpolo.com, Newport Polo's Facebook, Twitter, and Instagram fan pages.  Must be 18 years or older and a legal U.S. resident to participate.  No purchase necessary.  By participating, you agree to the terms and conditions below.

The “Vote for Joy - Best of the Best in Show 2022” contest is sponsored by Newport Polo Inc (“Sponsor”).  This contest is governed by these official rules (“Official Rules”).  By participating in the Contest, each participant agrees to abide by these Official Rules, including all eligibility requirements and understands that the results of the Contest, as determined by Sponsor and its agents, are final in all respects.

Eligibility
This Contest is open only to current, legal residents of the continental United States, who are 18 years of age or older, located within the United States at the time of entry. Contest participants that are not eligible to win the Grand Prize are: employees of Newport Polo Inc and Cocoa & Co., and members of employees’ households, whether or not related.  Contest participants must a.) appear in one of the photos in the Contest Album, and b.) must tag themselves in the photo, and c.) be a current Fan/Follower of the Newport Polo Facebook fan page (by Liking the page) to be eligible to win the Grand Prize.

To be eligible for a voting reward, participants must meet the following: a.) Like a minimum of one (1) photo in the "Vote for Joy" album on Newport Polo's Facebook fan page, and b.) be a current Fan/Follower of the Newport Polo Facebook fan page (by Liking the page), and c.) be age 18 or older and a legal resident of the United States, located within the United States at the time of voting.   Each voter is responsible for sending a message to the Newport Polo Facebook Fan Page to claim the voting reward.  (Voting Reward described above).

Voting
Voting for a winner will be conducted on Newport Polo's Facebook fan page, within an album of entries that have been pre-selected by Newport Polo.  A Like on a photo within the album constitutes a Vote.  Participants may Vote for more than one Entry, as well as for themselves (if they are a nominee).

The Contest Sponsor further reserves the right to disqualify any entry that it believes in its sole and unfettered discretion infringes upon or violates the rights of any third party, or otherwise does not comply with these Official Rules, or violates U.S. or applicable state or local law.

Prize
One (1) Entrant Grand Prize Winner will be chosen. The Grand Prize Winner will receive an exclusive Portrait Mini Session with Cocoa & Co. Eligible Session Types Include: Couple Session, Kids Session (up to 4), or Family or Group Session (up to 6). Winner of contest will choose one (1) of the above eligible session types. Sessions must be scheduled within 30 days of winner announcement. Included deliverables: 2 Hi-Res Photos & 2 Photo Prints.

Terms and conditions may apply. Incidental expenses and all other costs and expenses which are not specifically listed as part of a prize or voting reward in these Official Rules and which may be associated with the award, acceptance, receipt, and use of all or any portion of the awarded prize or reward are solely the responsibility of the respective prize or reward winner. ALL FEDERAL, STATE, AND LOCAL TAXES ASSOCIATED WITH THE RECEIPT OR USE OF ANY PRIZE OR REWARD IS SOLELY THE RESPONSIBILITY OF THE WINNER.

Publicity
By participating, each entrant grants Sponsor permission to use his/her name, likeness, or comments for publicity purposes without payment or additional consideration, except where prohibited by law.

ADDITIONAL LIMITATIONS
Prizes may not be awarded if an insufficient number of eligible entries are received. Prize is non-transferable. No substitution or cash equivalent of prizes is permitted. Sponsor and its respective parent, affiliate and subsidiary companies, agents, and representatives are not responsible for any typographical or other errors in the offer or administration of the Contest, including, but not limited to, errors in any printing or posting of these Official Rules, the selection and announcement of any winner, or the distribution of any prize. Any attempt to damage the content or operation of this Contest is unlawful and subject to possible legal action by Sponsor. Sponsor reserves the right to terminate, suspend or amend the Contest, without notice, and for any reason, including, without limitation, if Sponsor determines that the Contest cannot be conducted as planned or should a virus, bug, tampering or unauthorized intervention, technical failure or other cause beyond Sponsor’s control corrupt the administration, security, fairness, integrity or proper play of the Contest. In the event any tampering or unauthorized intervention may have occurred, Sponsor reserves the right to void suspect entries at issue. Sponsor and its respective parent, affiliate and subsidiary companies, agents, and representatives, and any internet network or service providers, are not responsible for incorrect or inaccurate transcription of entry information, or for any human error, technical malfunction, lost or delayed data transmission, omission, interruption, deletion, line failure or malfunction of any telephone network, computer equipment or software, the inability to access any website or online service or any other error, human or otherwise.

This contest is in no way sponsored, endorsed, administered by, or associated with Facebook.

Any questions regarding this Contest should be directed to agnes@nptpolo.com.