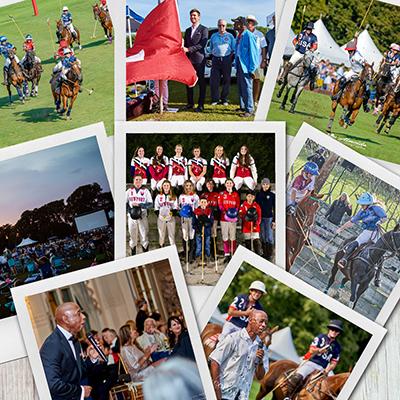 It felt like spring in the Alps as opening day of the Newport International Polo Series 30th Anniversary season approached.  The summer Olympics underscored our anticipation for the return of international challengers to mark the Polo Series pearl jubilee, and Switzerland was on deck for the season openerer.  Celebretatory details for the 30th anniversary were rolled out throughout the year, from commemorative players' gifts and season passes to new festivities and the return of favorite traditions.  Every opportunity was taken to reflect on the past 30 years and restore our favorite traditions and celebrations of polo in Newport.

The 27th edition of the official season program for the Newport International Polo Series, produced in partnership with the Rotary Club of Newport and Newport This Week, saw a groundswell of community support.  Since its inception, the publication has become a vital source of funding for the Rotary Club of Newport which receives 100% of the revenue generated by ad sales.  This year, over 50 local businesses showed their support with an ad, helping to fund the Rotary's college scholarship program and many charitable efforts.

A star-studded charity gala, one of very few to take place in 2021, reached platinum status for the comeback tour of the annual International Polo Charity Ball.  A pandemic-induced postponement from 2020 couldn't dampen the spirits of those looking forward to the Caribbean-themed Bon Voyage Ball as most of the sold-out guest list held onto their tickets for more than a year.  Their patience was rewarded.  Guests of honor, the Dominican Republic Polo Team proved charming company while a red carpet entrance included photos and glad-handing with Grammy-nominated R&B Legend, Jeffrey Osborne.  Osborne dazzled party-goers with an impromptu performance before a whirlwind live auction set a new fundraising record.  Nearly $85,000 was contributed to the beneficiary, the Jeffrey Osborne Foundation, whose primary recipients provide food, shelter, and a safe haven for RI families and children in need, and keep music and the arts in our public school systems.

The return of the 5th annual All Charity Day drew over 1K supporters for 14 local non-profits to watch an exciting 6-chukker match on a pleasant Sunday afternoon.  Fundraising from ticket sales, raffles, and other activities on game day earned over $18K, providing dire funding support after pandemic conditions hindered efforts in the past year.  Money raised went to wide-ranging causes from arts and education, child and family well-fare, animal rescue, health, and veteran assistance.

Switzerland debuts as 35th nation in the Polo Series.

Anthem encore by Jeffrey Osborne during USA vs. Dominican Republic.

Achieved overnight success with Frozen Cocktails at the Patio Bar.

Rolled out anniversary collection in the Pro Shop.

Introduced 30 first-time players to the King of Games through Adult and Teen Intro Clinics, plus provided weekly polo instruction to over 170 polo students.

Graduated the 10th class of players from the annual summer Coaching League.