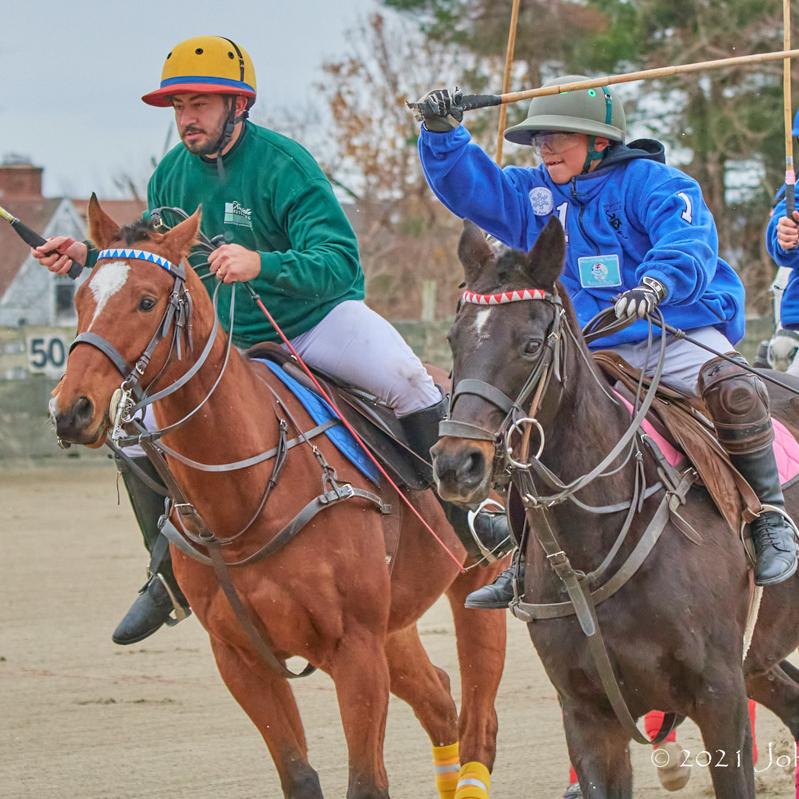 A gaggle of competitive local players strutted their stuff in the 9th annual Thanksgiving Arena Polo Tournament hosted by Newport Polo on November 27-28, enjoying a lengthy run of Autumn arena polo competition.  The two-day tournament drew 4 teams for a friendly rivalry over the holiday weekend in the outdoor arena.

Tenacious Divas faced Newport W2Play in a four-chukker Semi-Final game for the first berth in the Sunday Championship.  The Divas dominated in the first half, accumulating 8 goals to their opponent's 1, but the second half saw a momentum shift in favor of NptW2P who outscored the Divas 6 goals to 4, but it was not enough to overtake the Divas, who finished ahead 13-7 to advance to Sunday's Final.

Semi-final Game 2 pitted Kinsella Building Co against Newport in a relatively close and up-tempo, four-chukker match.  Newport came out swinging, and Kinsella Building matched them goal for goal in the second chukker, for a 5-5 tie at the half.  In a repeat of the first half, Kinsella was unproductive for a chukker before reigniting in the subsequent period to trail by a point at the buzzer, giving Newport the go ahead to Sunday's Final.

Final glory came down to the Championship contest between Tenacious Divas and Newport. Newport held the upper hand for the first half, 7-4, but living up to their name, the Divas were 1 goal up on Newport in the 3rd chukker, and 2 goals up on Newport in the 4th chukker, resulting in a tie in regulation play.  A penalty shootout took place to break the tie, and in the second round of penalty shots, Touba Ghadessi scored the winning point for the Divas, to claim the 2021 title.

Ghadessi was named the MVP and Best Playing Pony was Pepper, played by Dan Keating in the 2nd chukker. Special thanks to volunteered services of umpires Patrick Quigley and Chris Fragomeni, along with goal judges Hanalei Streuli, Charlie Bullis  and Gus Reed, timekeepers Mary Roda, and photographers John Lincourt and Scott Trauth.