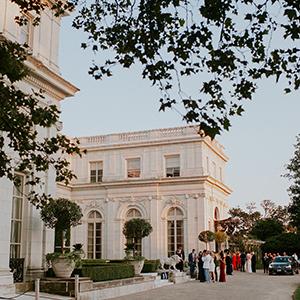 The 21st annual International Polo Charity Ball hosted by Newport Polo is set to return in 2022 with the aim of besting its all-time fundraising record set this past year.

Now entering its third decade, the Polo Ball has become one of the most anticipated events of the Newport summer.  The annual sell-out affair draws over 400 hundred generous and fun-loving attendees together for a legendary fête in support of a good cause.  Rosecliff has become the favored Polo Ball setting, as the premier estate amidst America’s finest collection of gilded-age mansions. Commissioned by Nevada silver heiress Theresa Fair Oelrichs in 1899, architect Stanford White modeled Rosecliff after the Grand Trianon, the garden retreat of French kings at Versailles. After the house was completed in 1902, at a reported cost of $2.5 million, Mrs. Oelrichs hosted fabulous entertainments at Rosecliff, including a fairy tale dinner and a party featuring famed magician Harry Houdini.

2021 saw an all-time fundraising record as the Bon Voyage Ball garnered over $80K to benefit The Jeffrey Osborne Foundation and welcomed guests of honor, the Dominican Republic Polo Team and R&B legend, Osborne himself as Honorary Ambassador.  The gala committee is in full stride bringing together the details for the 2022 celebration to include lively entertainment, superb cuisine, and an enticing auction of rare finds offered to the highest bidder.  Auction beneficiary, polo team guest of honor, and tickets are all to be announced in the coming weeks.  Festivities will continue the following day as the honored polo team challenges USA in the Newport International Polo Series.  After the match, join the players field-side for a superb Lobsterbake by the masters, McGrath Clambakes & Catering.  Sign up for our private & secure eNewsletter to receive the latest updates.

Inquiries for sponsorship of the 21st annual Polo Ball and for auction donations may be directed to Co-chair agnes@nptpolo.com.

The Newport International Polo Charity Ball found its start at the turn of the millennium to extend the goodwill of the Westchester Polo Club (Newport Polo's official body) and the Newport International Polo Series for lasting community benefit.  Each year a non-profit beneficiary is selected based on the impact it has on our community and the timeliness of need & mission to receive proceeds from silent and live auction fundraising.  Annual beneficiaries continue to receive elevated awareness and support through additional fundraising opportunities that arise over the course of the year and beyond.  Through its 30 year history, Newport Polo has helped raise over $1.6million dollars for civic & charitable non-profits through initiatives including the Polo gala and other fundraising events, charity Polo Matches, and countless ticket donations to the Newport International Polo Series.