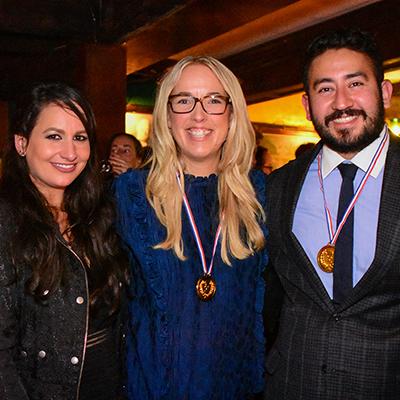 Newport Polo’s annual Players Dinner on Oct. 30th at Clarke Cooke House in Newport gave opportunity to celebrate the 2021 polo season successes, conclude the 30th anniversary jubilee of the Newport International Polo Series, Presented by Turkish Airlines, and recognize those who contributed to an outstanding year.

“The awards dinner is an opportunity to express appreciation for the leading figures that make the Polo Series a great tradition, and members of America's First Polo Club leading the charge,” commented Keating.

Also acknowledged were the 2021 Best Playing Ponies chosen as the standouts by this year's visiting international teams: Pumpkin Loaned to Switzerland by P Friedman; Picaza Loaned to Argentina by S Corro; Sylvie Loaned to Italy by D Keating; Jack Loaned to Dominican Republic by D Keating; Persia Loaned to Jamaica by M Keating; Diva Loaned to Mexico by D Bullis, whose names are embroidered on the perpetual blanket displayed across the Trophy Table in the center of the dance floor.

A dozen or so Minnie Awards were also given out to cap the evening's memorabilia of the past season, before DJ Drew took center stage with dance floor hits til last call, including the 1977 throw-back R&B/funk hit 'Back in Love Again' by our Entertainer of the Year, Jeffrey Osborne.  See our Facebook fan page for an album of photos from the evening.

Named the Polo Series’ Restaurant of the Year for the 11th consecutive year for innovative cuisine and legendary ambiance as the place to see and be seen, the Clarke Cooke House is a quintessential Newport experience and polo players’ entertainment headquarters in downtown Newport (historical details).