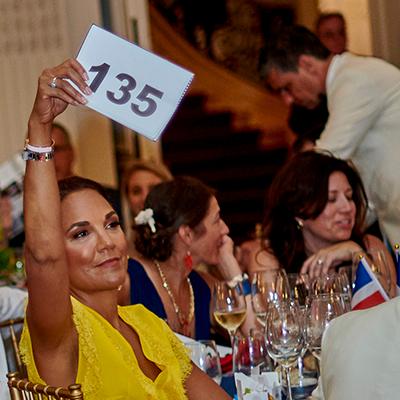 The comeback tour for the 20th annual International Polo Charity Ball was a smash hit, reaching platinum status, shattering the past polo ball record in total fundraising, to benefit the Jeffrey Osborne Foundation.  Over 400 generous and fun-loving attendees heralded the evening's success, exceeding $80,000 in fundraising for the Foundation's mission to support initiatives and organizations in Rhode Island that keep music and the arts in our public school systems and provide food, shelter, and a safe haven for families and children in need.

"As you might imagine, Jeffrey's schedule was fairly well booked, but to our surprise he rearranged it to make sure that he could travel from L.A. to attend in person," explained Dan Keating, Newport Polo Founder & President. "A magnificent impromptu performance of 3 greatest hits, in his legendary baritone voice stole the show, eclipsed only by his gracious personality in thanking guests and posing for photos".

Anticipation was at an all-time high, following a COVID-induced postponement of the original 2020 event date, as the sold-out guest list held on to their tickets for an extra year to join the celebration.  Gaiety commenced at the evening's first port of call on the Newport waterfront for a meet & greet reception at Brenton Hotel, where Honorary Gala Ambassador, Jeffrey Osborne glad-handed party-goers and highlighted the impact his organization has in Rhode Island to an enthusiastic guest list.

Then, the ship cast off for its next destination, the famed Rosecliff mansion where a red-carpet entrance felt like a walk-of-fame, as Grammy nominee, Jeffrey Osborne, once again greeted arrivals and posed for pictures in the iconic marble foyer.  Guests of honor, the Dominican Republic Polo Team held court below the terrace, alongside Newport Polo Ambassadors, Meg and Jeremy Stowe.  All the while, photographer Cocoa & Co captured the magical moments in progress. (View Album)

Tropical chic, vintage glam, and nautical couture were on full display, as the creative black-tie theme opened a plethora of options for statement attire as the promenade moved to the terrace where jewels of land and sea awaited in the curated silent auction.  Dominican-themed libations were poured by renowned mixologist, The Cocktail Guru, as yet more photos ops from the Sundeck overlooking the Rhode Island Sound were put to full use.

Sounds of perennial favorite musical ensemble, Decades by DeZyne, called the party to order in the grand ballroom to get to the heart of the evening.  As the inspired 3-course Dominican dinner menu was laid out by expert Blackstone Caterers, Newport International Polo Series Founder, Dan Keating, inaugurated the main event with his welcome remarks and introductions:

A cameo performance by Osborne brought the house to its feet with his hit singles On the Wings of Love, Back In Love Again, and You Should Be Mine. A tough act to follow, Sotheby's master auctioneer, Hugh Hildesley capably presided over the whirl-wind Live Auction of once-in-a-lifetime experiences, including a private dinner and concert with Jeffrey Osborne.  Competitive bidding ended the live auction while guests circled, with dessert, for a final chance at the silent auction bounty before the band struck up to fill the dancefloor 'til the stroke of midnight.  Docked once again, the evening's finale landed at Bannister's Wharf for the last dance at the famous Clarke Cooke House Skybar.

The Newport International Polo Charity Ball found its start at the turn of the millennium to extend the goodwill of the Westchester Polo Club (Newport Polo's playing member body) and the Newport International Polo Series to provide lasting community benefit.  One of the most anticipated events in the Newport season, the annual sell-out charity gala brings together the polo community for a lively celebration to support worthy charitable organizations. Festivities carry on throughout the weekend as Team USA faces the international team of honor featured at the gala, concluding with the annual Lobsterbake by the masters, McGrath Clambakes & Catering.  Annual beneficiaries continue to receive elevated awareness and support through additional fundraising opportunites that arise over the course of the year and beyond. Through its 30 year history, Newport Polo has helped raise over $1.5million dollars for civic & charitable non-profits through initiatives including the Polo gala and other fundraising events, charity polo Matches, and countless ticket donations to the Newport International Polo Series.

The Bon Voyage Ball auction committee gratefully recognizes the generous donors, without whom, the evening could not have reached such success.