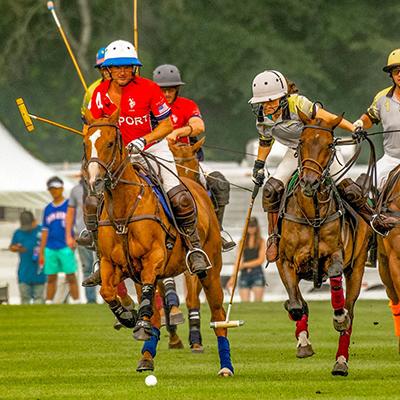 Clad in steely grey with flecks of gold, the Pittsburgh players threw down the gauntlet against Newport’s red & white on Saturday, July 17, as the challenger fought to break the home team’s winning streak. Fans from far and wide descended on the Newport International Polo Grounds to witness the rivalry unfold under the midsummer sun.

As field-side picnics were perfected, tailgates teeming with tasteful hors d'oeuvres, spectators took advantage of the sunny weather to engage in competitive Cornhole face-offs. For the full New England experience, Newport Chowder served up classic seafood chowder to locals and visitors alike. Additionally, A Mano Pizza, Wally’s Hot Dogs, Stoneacre Brasserie, Hawaiian Jim’s, and Chelsea’s Creamery spoiled patrons with their choice of delicious summer staples. Canines of all sizes, from playful pups to giant mountain dogs, accompanied their owners on-leash as they shopped handmade jewelry in the Vendor Village, sipping a frozen drink from the bar to beat the heat.

Eager to begin the much-awaited match, the teams rode onto the field shoulder-to-shoulder in a display of camaraderie and sportsmanship. Newport was fronted by #1 Laurel Howe, followed by birthday reveler Leo Mejia at #2, Tim Day at #3, and veteran player Dave Bullis playing back as #4. For the Steel City, Alex Burkland played forward at #1, former Newport player, now Pittsburgh transplant, Lauren Bilsky, returned to the Ocean State at #2, Stewart Burkland played #3, and Captain Justin Powers commanded the team at #4.

The game began with the official coin toss, presided by Modern Luxury Boston’s Jean Roberts, setting off the 6th duel between these east coast rivals. Both teams were eager to fend off the opponent’s advances, leading to a scoreless first chukker. As commentator William Crisp remarked, the first goal is always the hardest. Once Stewart Burkland broke through with a goal in the second chukker, Pittsburgh kept the ball rolling with a goal from Justin Powers and another by S. Burkland. Newport attempted to stop Pittsburgh’s scoring surge, but S. Burkland was too quick and sent his third goal of the game flying through the goalposts with 5 minutes to the half. As the crowds poured onto the field for the half-time Divot Stomp, Pittsburgh relished its 4 – 0 lead.

During the break, judges patrolled the field as they hunted for the most festive picnic to receive the Stella Artois Best in Show Prize. Underneath the Scottish flag, a tailgate draped in Red & White took home the prize, customized tailgate essentials from Stella Artois. Fog rolled over the historic Glen Farm, granting the afternoon’s competition a dramatic setting and spectators a respite from the July sun. In the Pavilion, Modern Luxury Polo Lounge guests topped off their glasses with signature drinks from The Cocktail Guru, as polo ponies and players returned to the field.

Newport returned from the break emboldened and ready to attack. Dynamic Tim Day bookended the fourth chukker with two goals for Newport, finally putting the Red & White on the board. Incredibly, while Pittsburgh was reeling from the 4th chukker rain, Day doubled Newport's score with two more goals in the 5th! The rivals entered the final chukker tied 4 – 4. In usual Newport vs. Pittsburgh fashion, this would come down to the wire. In a rush of energy, Dave Bullis opened the sixth chukker with a goal for Newport and Day followed his lead with another goal of his own. Now down 6 – 4 with just over three minutes to go, Justin Powers stepped up to the plate and scored for the Steel City to narrow the gap. It looked as if Pittsburgh might be able to come back and squeeze out their first victory in the Newport International Polo Series, but a final goal from Bullis with one minute left in regulation play proved to be the nail in Pittsburgh’s coffin. Yet another neck-and-neck game for the rivalry ended in Newport’s favor, 7 – 5.

After the final buzzer, the teams took to the prize-giving platform, autographing Polo balls for young fans along the way. Charles Lomnitzer of TD Bank presented the perpetual trophy to Newport and the home team raised it above their heads for the sixth time against Pittsburgh. Newport Captain Dave Bullis popped the Veuve Cliquot, sharing a festive toast with Pittsburgh players after a fun and hard-fought game. The Newport win left a buzz in the air, and fans congregated at the Patio Bar afterward to dance the night away with the players.

In accordance with RI State reopening guidelines, capacity limits have been lifted at the polo grounds, resuming historic seating options, while some conservative measures remain in place, including reduced hours and carry in carry out trash after a successful strategy approved last year through the pandemic, when live audiences could still enjoy the Newport International Polo Series polo matches every Saturday as they have for 30 years to witnessed the timeless sport unfold on the manicured, emerald green at Glen Farm, home of the Polo Series, in a classic exhibition of horsemanship and valor, with host, the Newport Polo Club, where the home team - Newport/USA - meets challengers each season from around the world and as well as teams representing major US cities and regional rivals in one of Newport's unique traditions & renown attractions.