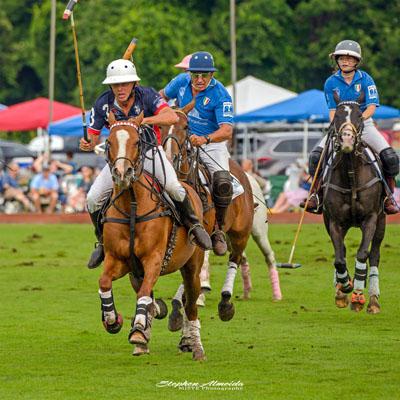 Exuberant crowds filed into the Newport International Polo Grounds on Saturday, transforming the normally bucolic setting into a colosseum for the Sport of Kings.  The Italian team arrived from The Eternal City, abuzz with excitement to represent their home country in a momentous sporting weekend coinciding with the European Football Championship, in which Italy was also a contender.

Team USA evoked the gladiator spirit, determined to win back the perpetual cup from the reigning Italian champions, joining the public welcome reception held on the eve of battle at the new Brenton Hotel on Newport's waterfront centrum.

Around the polo field, the Italian tradition of “la famiglia” was exemplified as picnic spaces welcomed friends and family.  The Italian tri-color could be seen waving throughout, and many fans wore the Savoy blues of gli Azzurri, the national teams' traditional hue.  Local fans went for Newport Polo's 30th anniversary colors of Red and White for consideration in the Best in Show contest & prizes from Stella Artois.

Following the grand entrance, the teams mounted their steeds and took to the field with USA sporting traditional navy jerseys and Italy in the national blues.  Peter Friedman led the Americans onto the field as #1, with the energetic Minnie Keating at #2, Polo Series Founder Dan Keating at #3, and Sam Clemens rounding out the team at #4.  The Keatings were not the only father-daughter duo on the field, #1 Sofia DeAngelis and #4 Giacomo DeAngelis were bookends for the skilled Italian team.  They were accompanied by Matteo de Paolis at #2 and Marco Elser at #3 to field an extraordinarily adept Italian team.

No stranger to horsepower, Christine Scott, Herb Chambers Exotics Marketing Director, joined the captains for the coin toss.  Beginning directions decided, the hotly anticipated game was ready to begin.  The first chukker was hard fought, but finally USA broke through with two goals scored in the final minute by Dan Keating and Peter Friedman.  This lit a fire under the Italians for the second chukker and Giacomo DeAngelis sent the ball flying through the goal posts to score with USA in the lead heading into the third chukker, 2 – 1.  Play then picked up pace as both teams sought to add points to their score before halftime.  Minnie Keating’s operatic plays lead her to two back-to-back goals, followed by a penalty conversion by teammate Sam Clemens. Matteo de Paolis answered with a triumphant goal, but Peter Friedman was quick to retaliate with a goal of his own and USA cemented their first-half lead 6 – 2.

Jeffrey Osborne’s rich and uplifting voice welcomed fans to the field for the half time Divot Stomp with his 80's hit “Stay With Me Tonight” music video playing on the Jumbotron, in tribute to fundraising efforts underway to support this year's polo gala beneficiary, the Jeffrey Osborne Foundation whose works to support families and the arts in Rhode Island.  With the field sufficiently stomped, spectators flocked to the Herb Chambers Exotics Village to marvel at Lamborghini Boston’s stable of Italian motorcraft, and the Vendor Village to shop for souvenirs and rare finds. Provisioning for the second half, a last stop at the Patio Bar refreshed picnicers with wine to accompany antipasto spreads before settling in to watch the second half.

Matteo de Paolis kicked off the fourth chukker and Italy’s comeback campaign with a tricky goal from the field and opponent Minnie Keating turned play around, taking the ball down the length of the pitch to score her third goal of the day.  Evenly matched again, the fifth chukker saw goals from each team, with Dan Keating and Matteo de Paolis scoring.  The sixth and final chukker brought Italy down to the wire and a goal from de Paolis in the first 30 seconds set the tone for a high scoring finale.  Another goal from D. Keating brought the score to 9 – 5, but Giacomo DeAngelis, not one to go down without a fight, scored two goals in two minutes to narrow the gap.  Unfortunately, the clock ran out and Italy fell to the Americans 9 – 7, breaking their winning streak.

Christine Scott returned for the Veuve Cliquot Trophy Presentation, where both teams were adorned with laurel wreaths and the Americans lifted the USA vs. Italy Liberty Cup for the 7th time in rivalry history since 2012.  Minnie Keating was heralded as the match’s MVP with three tremendous goals and Italy crowned Sylvie, played by Marco Elser, the day’s Best Playing Pony.  Festivities continued at on the Pavilion Patio with Gosling’s Players Hour serving up complimentary Dark & Stormy cocktails to enjoy with the players and That’s Amore Après Polo menu offering up timeless Italian favorites of handmade Neapolitan pizza and gelato to enjoy in the evening light.  Saturday captured the essence of summer, with sun-kissed patrons celebrating each other’s company with exquisite picnics and the high speed adrenaline of polo in the midsummer sun.

In accordance with RI State reopening guidelines, capacity limits have been lifted at the polo grounds, resuming historic seating options, while some conservative measures remain in place, including reduced hours and carry in carry out trash after a successful strategy approved last year through the pandemic, when live audiences could still enjoy the Newport International Polo Series polo matches every Saturday as they have for 30 years to witnessed the timeless sport unfold on the manicured, emerald green at Glen Farm, home of the Polo Series, in a classic exhibition of horsemanship and valor, with host, the Newport Polo Club, where the home team - Newport/USA - meets challengers each season from around the world and as well as teams representing major US cities and regional rivals in one of Newport's unique traditions & renown attractions.