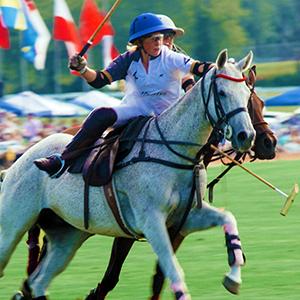 Newport Polo will host the 3rd annual East Coast Open & East Coast Handicap Women's Polo Championships from July 27 - August 1, 2021.  Inaugurated by Newport Polo in 2018, and sanctioned by the United States Polo Association, these historic tournaments will feature the highest level of women's competition in the Northeast this season.

Excitement is at an all-time high as team registration opened during Women's History Month, and the top players for the US and abroad prepare for their return to America's First Polo Club to make their mark on two trophies commemorating pioneering American women, and compete for thousands of dollars in prize money. 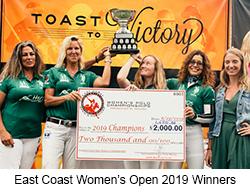 The East Coast Women's Open will feature a top-flight of teams at the highest handicap levels.  The winning team will have its name inscribed on the perpetual Sunny Hale legacy trophy, that honors one of the top women players of all time, in the sport of polo.  Hale earned her equestrian prowess at an early age as the daughter of the first woman admitted to the United States Polo Association.  She turned pro in the 1980s, just as women were reaching the 10-year milestone of acceptance in U.S. professional polo.  Hale reached a career-high handicap level of 5 goals, achieved by few women or men in the sport.  She went on to an achievement earned by even fewer players still, becoming the first woman to win the U.S. Open Polo Championship.  Hale passed away in 2017 and is remembered as a passionate ambassador for polo who helped pave the way for the growing participation of women. 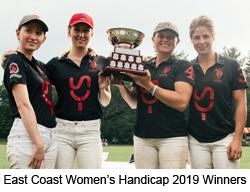 Taking place concurrently the East Coast Women's Handicap will be played at a medium handicap level, offering a wider opportunity to more players, still in a highly competitive format.  Anne Hutchinson, pioneer of the New World who founded the colony of Portsmouth, RI is honored as the namesake for the winner's perpetual cup.  Hutchinson came to the fledgling Massachusetts Bay Colony with her husband in 1634 as followers of the Puritan reformer, John Cotton.  Hutchinson became an outspoken dissenter of the colony's religious leaders, for the sake of universal religious freedom, resulting in her banishment and establishment of a new colony, Portsmouth, in 1638 on a small island in Narragansett Bay.  The trophy honors her courage, perseverance and martyrdom.  Some colonists from Portsmouth continued moving south, establishing the colony of Newport, which would become the location of America's First Polo Club in 1876.

Competition will be co-hosted by Newport Polo in Newport, RI, and Myopia Polo Club in Hamilton, MA.  Semi-final rounds will begin on July 27th at Myopia.  The action will move to Newport for the Open Finals scheduled as the featured match on July 31 in the Newport International Polo Series, and the Handicap Finals on August 1.  Receive the latest tournament information, including team rosters, and match schedule by private subscription to Newport Polo's eMagazine.

At a time when women were just breaking into the international sporting world, so too were they breaking into the sport of polo.  Initially, the United States Women's Polo Association was organized, presenting the first U.S. women's open in 1937.  The USWPA disbanded as a result of WWII never to re-form, leaving women outside the U.S. professional levels of the sport until Sue Sally Hale was accepted into the United States Polo Association in 1972.  Today, polo is one of the few co-ed sports where women and men compete equally on the same teams.  Women represent the fastest-growing segment of polo in the U.S., making up 40% of registered players.