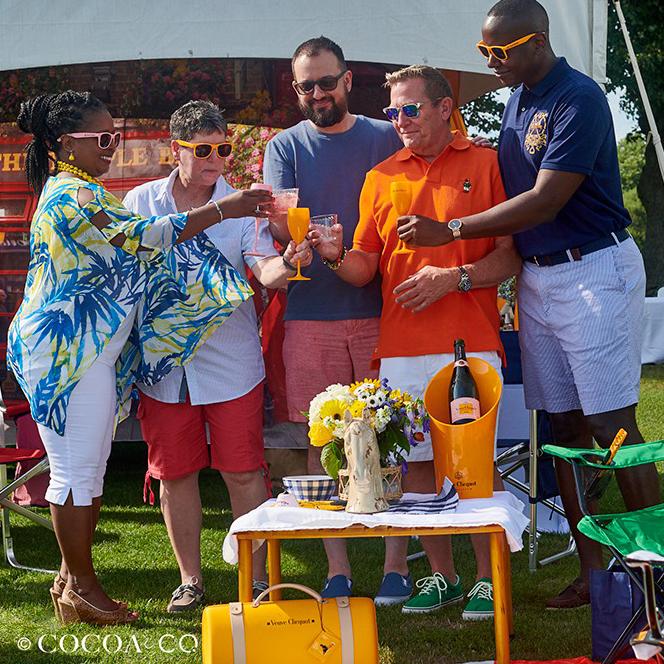 Newport Polo fans discovered the best salve for the pandemic was to Keep Calm and Polo On.  Attending the matches was the closest thing to normalcy last summer, and by observing basic protocols in effect at the polo grounds, families and friends were ensured a Covid-safe and socially-distanced environment for outdoor entertainment, as enjoyed in seasons past.

To welcome these gregarious supporters, our partner of nearly 10 years, the world's #1 Belgian beer and host-with-the-most, Stella Artois rolled out the red carpet, toasting the most spirited Newport Polo fans at each match with a special prize, bestowed by a cast of weekly guest judges, photographed by our resident portrait photographer, inspired by weekly themes and applauded with a Jumbotron moment of fame.

As an encore tribute to the good cheer that our fans bring, we're calling upon the most discerning polo enthusiasts - our fans - to join us in this ovation and pick the Best of the Best In Show 2020!

Rewards for voting, and as well as a Grand Prize for the top vote-getter, will be awarded.

Reward for Voting: Each voter will receive a credit of a complimentary Lawn Ticket for the Newport International Polo Series, redeemable online for the match of their choice. To be eligible for the reward, a voter must: a. be a Fan of Newport Polo's Facebook Fan Page by Liking the page (not the album); and b. Vote/Like at least one (1) photo entry in the contest album. To claim the reward for voting, send a message to Newport Polo Facebook Fan Page. By participating, you agree to the terms and conditions of the contest, below.

Grand Prize:  One Grand Prize Winner will receive an exclusive COCOA & CO. MINI PORTRAIT SESSION for (choice of 1): Couple Session, Kids Session (up to 4) & Family or Group Session (up to 6), plus high res photos and prints (details below).  To be eligible to win the Grand Prize, winner must appear in one of the photos in the Contest Album and must tag themselves in the photo.  The Grand Prize winner will be determined by the photo that receives the most votes.  Votes will be reviewed for authenticity, including only one vote for self.  Duplicate votes will be disqualified.  Winner will be announced on Wednesday, February 10, 2020, on www.nptpolo.com, Newport Polo's Facebook, Twitter, and Instagram fan pages.  Must be 18 years or older and legal U.S. resident to participate.  By participating, you agree to the terms and conditions of the contest, below.

Follow Link To Best of the Best in Show 2020 Album.