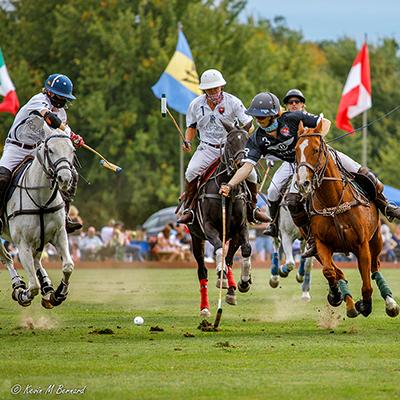 A horsepower packed Finals, Presented by Herb Chambers Exotics, closed the 29th season of the Newport International Polo Series on September 26th, 2020 with Bentley vs. Rolls Royce.  Newport's youngest players (Hotshots) lined up in Bentley uniforms to face the wisest players (Masters), representing the elder marque, Rolls Royce.  Polo fans embraced the British invasion with country picnics dotted around the pitch, plaid settings, and wickerwork baskets on the balmy September afternoon.  In the Exotics Village, fans could visit the stable of Bentley, Rolls-Royce, and Lamborghini for expertise about those rare autos.

The welcome tones of the Queen's English opened the match as the commentator introduced team Bentley (Hotshots) in black with Tim Day and Chris Frabomeni alternating at #1, Luke Merrick at #2, Charlie Bullis in the captain's seat at #3, and Minnie Keating at #4.  Playing for the Rolls-Royce (Masters) were Jonathan Kaye and Roger Souto alternating at #1, Dan Keating at #2, with Sam Clemens at #3, and Dave Bullis at #4.

The audience stood to face the American flag for the national anthem.  Then, a representative from Herb Chambers Exotics officiated the coin toss to determine the starting direction for the teams.  Color commentary during the match was provided by the beloved, William Crisp, regarded as the world authority on polo commentating.  Live video action and instant replays were produced on the polo world's first Jumbotron video wall scoreboard.

The Masters (Rolls-Royce) we're already starting in the hole in the battle of youth vs. experience, trailing the Hotshots (Bentley) by 4 wins to 6 since the first contest in 2014.  It seemed as though youth may be overrun when Clemens, D. Bullis, and D. Keating all scored for Rolls-Royce to lead in the opening chukker.  C. Bullis and Day didn't leave those goals to stand unanswered but still left Bentley trailing 2 - 3 as time ran out.  Bentley changed gears in the second chukker, entering a slipstream to goal thanks to C. Bulls and Day once again to take the lead, 4-3.  D. Keating rallied for Rolls-Royce in the third chukker, adding another goal to its score.  Bentley continued its hard drive forward, though, widening the gap with two goals by C. Bullis and one by Merrick to take the first half 7 - 4.

Half-time gave a brief intermission for the limited spectator audience to stretch their legs with a masked and socially-distanced divot stomp to repair the pitch for the second half.  The time-honored tradition helps replace the tracts of grass torn up by the horses for a smooth surface and faster play to conclude the match.  Signature libations, boutique wines, and beers were on tap for those venturing to the Patio Bar, including the Drink of the Day, the British classic and polo staple, Pimm's No.1 Cup.  Mouthwatering delights from the on-site food trucks were dished up, including handmade pizza, gourmet hotdogs, kettle corn, homemade ice cream, gelato, donuts, and shaved ice.  A team spirit sale in the Pro Shop as a thank you to supportive fans gave up to 40% off limited edition team sportswear, gifts, and souvenirs.  Nearby, photo-ops in the Exotics Village drew a steady stream of admirers to snap a pick with the famed autos on display.  Meanwhile, Old Glory rippled at centerfield next to England's St. George's Cross in a row of 34 international flags overhead that have participated in former seasons.

Spectators resumed their picnics as the teams mounted for to make the dead-run to the perpetual cup and bragging rights for the season.  M. Keating and Day continued running interference against Rolls-Royce, clearing a path for two more goals by C. Bullis and Merrick.  D. Keating and Kaye throttled up to match the Bentley goals but still trailing, 9 - 6.  Then, Rolls-Royce lost traction in the 5th chukker, despite one goal by D. Bullis, Bentley sped away. C. Bullis and Day each had a successful run on goal, while Merrick made 2 for a 13 - 7 Bentley lead.  Rolls-Royce threw up every roadblock possible to slow the Bentley roll in the final chukker.  D. Bullis and C. Bullis made a matching goal for each side.  Still, there were too many miles for Rolls-Royce to makeup, ceding victory to the youth of Bentley.

The teams took their traditional salutatory lap around the perimeter, giving farewell gestures to the applause of grateful attendees, a tradition originating at the Newport International Polo Series in 2003, and now emulated at polo clubs around the world, followed by the Veuve Clicquot Champagne Toast & Trophy Presentation where the perpetual Liberty Bowl was presented to Bentley by Christine Scott, Marketing Director of Herb Chambers Exotics and high-scorer laurels to C. Bullis with an impressive 7 goals.

Resident portrait photographer Quison Lawhon captured family gatherings and picnics in Autumn decor & attire (published online at Cocoa & Co.) in contention for Best In Show honors from Stella Artois, awarding a special prize and the chance to grace the party pages of an upcoming issue of Boston Common Magazine, while enjoying one of this season's rare 17 matches, still the only live attended sporting event in New England since the start of the pandemic.

Safety being a top priority, RI State approved COVID-19 safety measures are in effect at the polo grounds this season (plan details) including reduced capacity with socially-distanced tables in the Davitt Pavilion, fieldside Tailgates and Picnic Patches on the lawn from which to view the matches at the polo grounds, sold-out audiences have enjoyed the Newport International Polo Series polo matches every Saturday since Opening Day on June 6, where spectators for nearly 30 years have witnessed the timeless sport unfold on the manicured, emerald green at Glen Farm, home of the Polo Series for the past 28 seasons, in a classic exhibition of horsemanship and valor, with host, the Newport Polo Club, where the home team - Newport/USA - meets challengers each season from around the world and as well as teams representing major US cities and regional rivals in one of Newport's unique traditions & renown attractions.

The Polo Series is scheduled to continue every Saturday through September. The schedule of teams is subject to change, as per RI State mandates in effect at the time, on international travel and Adult Sports.  Stay current with the 2020 team lineup & stats, latest news, events, and more by e-scription to the Gameday Briefing (sign up) and weekly eMagazine (sign up). Both subscriptions are private and spam-free.

The Polo Grounds' favorable proximity to the shores of the island's Sakonnet east passage provides reliably cool coastal effects, moderating afternoon temperatures and providing a dependable breeze for the late afternoon polo matches all summer.  Minutes from the bustling Newport waterfront, the International Polo Grounds are located on the acreage of Glen Farm, 250 Linden Lane (off of Rte. 138) in Portsmouth, RI. This bucolic setting is the last 100 acres of a pre-colonial settlement from the 1600’s that became the Town of Portsmouth's original gentlemen's farm, an 800-acre manorial estate established during a Gilded Age movement of retreat from the high life into pastoral country acres, that would become the future home of polo in the next century. Its classical 19th century stone barns and its park-like grounds were rehabilitated by Polo Series founder, Dan Keating in the early 1990’s and continue to thrive as an equestrian & community recreational property, and home of the Polo Series.

Polo is, without doubt the oldest ball game in the world today. First recorded in the 6th century b.c. when the Turkomans beat the Persians in a diplomatic tournament, the alluring game caught on with equestrian royalty and cavalry, and took off with globalization, withstanding the tests of time. By the time Polo arrived on Newport’s shores during the Gilded Age, the sport was nearly 2500 years steeped in tradition, captivating newcomers like Newport's summer sporting set who embraced the new pastime, establishing America's first polo club in 1876.  A charter member of the United States Polo Association, the club today is still a trailblazing model polo club, hosting the Newport International Polo Series public exhibition matches, supporting philanthropic causes, organizing tournaments, polo club member services and polo instruction year-round. Experience the king of games in its American landing at Newport Polo.