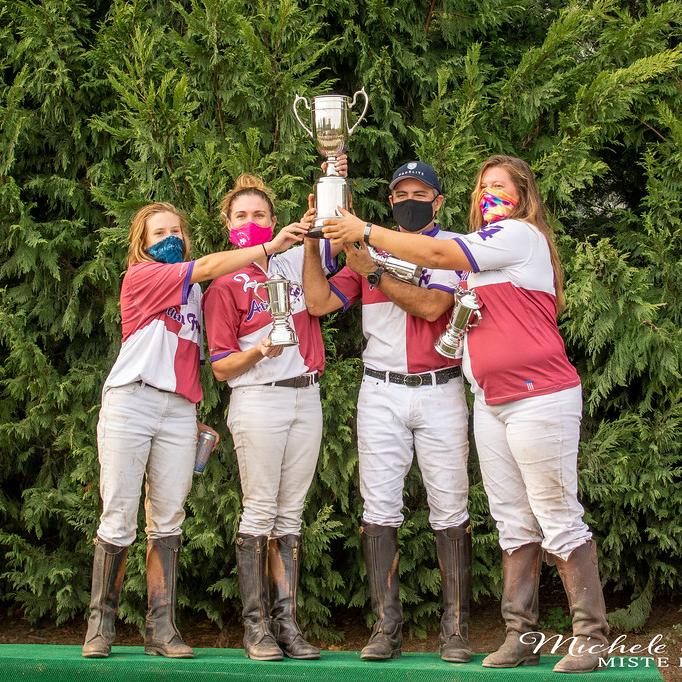 Four teams of top contenders descended on Newport to compete for one of the oldest arena polo trophies in the U.S. on a spectacular, mild Autumn weekend, October 10-11, 2020.  On the dais was the illustrious 86 year-old George C. Sherman perpetual trophy, inaugurated in 1934 to honor the father of arena polo, plus new prize money, laurels & recognitions.  Avalon Farm defeated TD Greengos in the Semi's to advance to a berth in the championship round, going on to beat the host team, Newport, in the Final to earn its place in US polo history as the 2020 champions.

"It's a great honor to host this historic tournament for the fourth consecutive year," commented Dan Keating, Westchester Polo Club (Newport Polo) president and Club Delegate to the United States Polo Association (USPA).  "As the first polo club in America, we share George Sherman's pioneering spirit, and were priveleged to keep the flame burning bright this year as well."

Day One featured single elimination Semi-Final competition to earn a place in the Championship round.  Team matchups were made by random draw, pitting returning contender Avalon Farm (Margaux Buchanan, Amanda Poor Roberts, Eugenio Ferrari and Katie Mitcham) against TD Greengos (Clark Curtis, Megan Schultz and Rory Torrey), in which Avalon Farm deftly subdued the biggest threat and handily outscored its rival 14-8 to stand out as a favorite for the Championship round.  Next up, in a rematch of last year's Final, returning runner up Newport (Roger Souto, Tim Day and Dan Keating) faced defending champs Westchester (Mia Purdom, Luke Merrick and Minnie Keating) in the second Semi-Final match.  The defending champs led through the first half, but Newport's third period rally turned the tide for a 15-13 opening round victory.

Day two competition brought TD and Westchester to play for the bronze finish.  Again Westchester led the first half in scoring, but a torrent unleashed by TD ushered the team into the lead by the end of the third chukker and continued outpacing Westchester for an exciting 3rd place finish, 12-10.  Then, it was on to the final event when Avalon Farm suited up against Newport to achieve ultimate glory.  Tied after the first period, Avalon Farm pulled away in the 2nd chukker with Newport on the ropes, but Newport came out swinging in the 4th period with a battery of goals to tie the score, allowing a single goal at the buzzer to trail by a 1 point, but the 4th chukker came down to arena technique where Avalon Farm had the upper hand to earn the laurels of victory as the new reigning champions.

Photo by: Michel and Stephen Almeida Photography.  View the full album on Facebook.