Over $20K Raised for 4th Annual All Charity Day 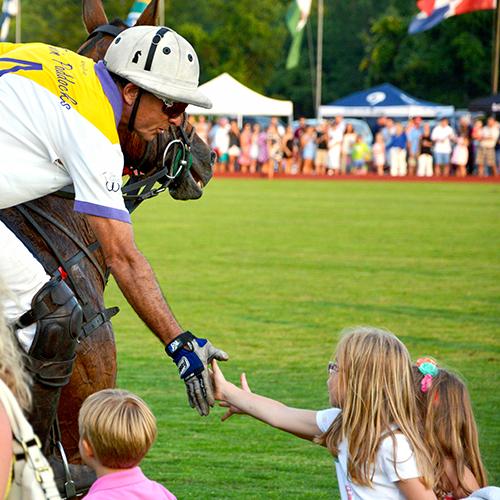 Twenty local civic and charitable non-profits filled the polo grounds with several thousand supporters on Sunday, July 14th for Newport Polo's 4th annual All Charity Day.  Proceeds from the ticket sales, plus raffles, heated silent auctions, and other game-day fundraising brought in over $22K for the participants, with totals still coming in.

Spectators were treated to a classic 6-chukker Pro-Am with some of the top players in the Newport Polo Club on the beautiful sunny afternoon. In Newport White was Lauren Bilsky and Stephanie Boyer splitting the #1 position, Laurel Howe at #2, Michel Nseir in the captain's seat at #3, and Rory Torry playing back at #4.  In Newport Red was Roger Souto playing #1, Margaux Buchanan at #2, Hamish Wates in the #3 captain's position, and Stephanie Still at #4.

The USA national anthem rang out across the field and then the ball was in play.  The Red team was first to goal when Souto split the posts, then a costly penalty converted by Buchanan gave them a 2 goal lead. White wasn't long to make up ground when Howe, then Nseir made a goal each to end the first chukker in a 2-all tie.  Another foul by the White team sent Souto to the penalty line at the start of the second. He neatly converted to break the tie, 3-2 for Red. Boyer quickly equalized again for White, then a goal from Torrey before the end of the second chukker put White in the lead, 4-3. Both teams ratcheted up the defense in the third, neutralizing any attempts at goal to maintain the White 4-3 lead.

During half-time, the teams gathered in their respective camps for a strategy session while fans took to the field to 'tread in'. The Portsmouth Dog Park organized a special half-time treat as the four-legged attendees gathered with their handlers for a dog parade around the field.  Baha Men's classic Who Let the Dogs Out sounded over the PA to start off the celebration.  With everyone returned to their parties, the teams took to the field for the second half.

The White team's players and ponies must have had a successful half-time strategy meeting as the player's advanced the ball to the Red goal and one of their mounts finished it off.  Then, a foul against the Red team gave Nseir the opening to add another goal for White, neatly converting a 40 yard penalty. It wasn't looking good by the end of the 4th as White was still leading 6-3.  Bilsky went immediately on the attack at the start of the fifth, scoring again for White.  A cluster of scoring by Buchanan and Hamish re-balanced the scales at 7-6 for White. Torrey managed a goal before time ran out to end the chukker 8-6 in favor of White. Torrey controlled the start of the final chukker, scoring again for White. Then Wates took one back for Red. Nseir was quick to respond with another White goal, immediately match again by Wates. Torrey followed up with another goal for an 11-8 White lead.  Wates gave his all, scoring two more goals, narrowly missing the chance to tie the game for overtime. White claimed victory, 11-10.

Through its 28 year history, Newport Polo has raised over $1,486,817 for civic and charitable organizations. Initiatives include the International Polo Charity Ball, special benefit matches, and countless ticket donations for the Newport International Polo Series.