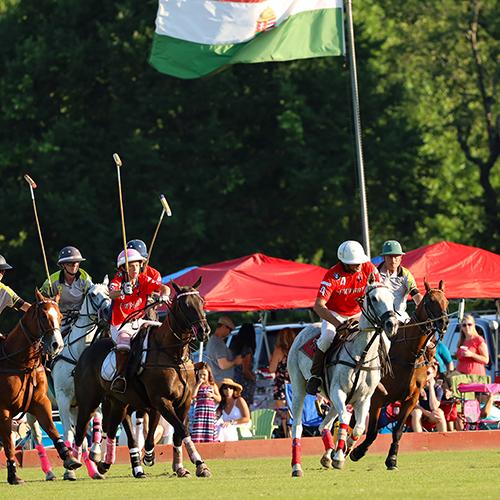 Newport continued its winning streak against Pittsburgh this Saturday. This was Newport’s 4th win in a row since 2016 after this year’s match ended in a score of 9-6 in the Newport International Polo Series XXVIII, presented by Brahmin.

Sporting grey and gold for Pittsburgh alternating in the #1 position was Grace Grotnik and Yaz Gotnik, with Amanda Roberts at #2, Mark Powers at #3, and Justin Powers at #4. Representing Newport in red in the #1 position was Patrick Quigley, with Sam Clemens at #2, Minnie Keating at #3, and Dan Keating at #4. Without a cloud in the sky, the national anthem followed the introduction to the players.

Despite a valiant effort, Newport outlasted Pittsburgh with a score of 9-6. M. Keating broke out of the pack to draw the first goal for Newport, followed by a second from Clemens.  Pittsburgh made it onto the scoreboard during the 2nd chukker with a goal from J. Powers to close the gap. The close score was short-lived as Clemens and M. Keating closed the chukker with three more goals for a 5-1 Newport lead.  Pittsburgh regained momentum in the 3rd chukker with two goals by J. Powers and one from, M. Powers to end the first have 5-4 in favor of Newport.

Y. Grotnik made the equalizer at the start of the second half, tieing the game at 5 all. This didn’t last long when D. Keating unleashed a torrent of 3 successive goals in the fifth chukker without any retaliation from Pittsburgh.  Pittsburgh was down 8-5 with the final seven minutes on the clock and a shaky start for its defense saw D. Keating sink another goal for Newport.  Roberts made a final push, but it was not enough to STEEL the trophy.  The shut-out went into its fourth year with a 9-6 Newport victory.

The match concluded with the Veuve Clicquot Champagne Toast & Trophy Presentation, as well as an autograph signing to meet the players. The 2016 Newport vs. Pittsburgh perpetual trophy was presented by Steve Squatrito Regional Vice President of Atria Senior Living.

During the match, one lucky individual from Auburn, MA won a gift card to the Clarke Cook House from Atria Senior Living in the weekly door prize drawing and an automatic entry into the Turkish Airlines Grand Prize Drawing at the Finals to win a trip for 2 anywhere in the world!  Also, during the match, the Stella Artois Tailgate Contest awarded a fabulous prize to a lively group of spectators.

"Polo is an international sport, played in over 80 countries around the globe," stated Dan Keating, captain of the USA squad. "we are honored to have teams traveling great distances to play in Newport."

The Newport International Polo Series is proud to present its 2019 sponsors including Brahmin, Davitt Inc, Turkish Airlines, TD Bank, Boston Common, Gurney's, The Vanderbilt, Hotel Viking, The Chanler, Vanderbilt International Properties, Clarke Cooke House,  Stella Artois, Rockstar Limo, Atria Senior Living, Goslings, McGrath Clambakes and promotional partners that entertain our visiting teams including the International Tennis Hall of Fame, America's Cup Charters, Newport Helicopter Tours, The Cocktail Guru, Newport Mansions, Island Surf and Sport, and Scooter World. Special thanks to Schultz Marketing Partners, Van Liew Trust, Tanglewood, and WCRI, Classical Rhode Island. “Our sponsors have been with us since the beginning. Without their support, the Series would not be as extensive as it is,” explains Dan Keating, Polo Series founder.