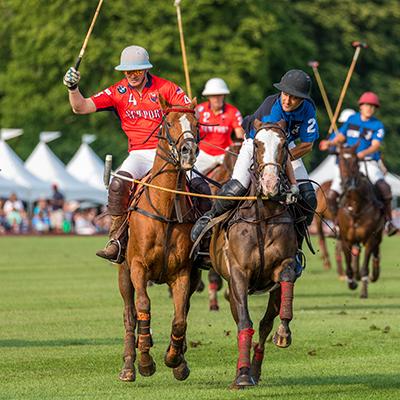 Boston narrowly won the day against Newport 9-8 to reclaim the perpetual cup for the first time since 2013 on Saturday, June 22, in the Newport International Polo Series 28, Presented by Brahmin.

A few passing showers didn't deter the teams or polo fans who we rewarded with a sunny afternoon and a closely played match.  Wearing blue for Boston in the #1 position was Mike Noll, with Estani Puch at #2, Martin Eddy at #3, and Rick Salter at #4. Representing Newport in red was Lauren Bilsky and Jenna Davis in the #1 position, with Minnie Keating at #2, Hamish Wates at #3, and Dan Keating at #4.

Bilsky and D. Keating went on an immediate offensive for the home team to lead the first chukker 2-0.  Newport's confident start was soon met by Boston's determination to win. Puch made a penalty conversion to get Boston on the board, followed by a goal from Eddy for a 2-all tie. Boston continued its strong offensive as Puch and Noll doubled the score, ending the first half with a 4-2 lead over Newport.

D. Keating quickly equalized during in the 4th chukker with a penalty conversion, then a goal during regulation play, closing the 4th chukker with a 4-all tie.  Puch duplicated D. Keating's 4th chukker performance, sinking another penalty, then breaking through the Newport defense for antoher goal.  D. Keating fired back, raising the score 6-5 in favor of Boston at the end of the 5th.  Davis made the Hail Mary goal for Newport, beating the final bell to tie the match 6-6.

The players lined up for an overtime penalty shootout to break the stalemate.  Each player had one chance to make the goal, starting with Newport's Davis who put Newport back in the lead. M. Keating and Wates didn't quite make the mark.  D. Keating finished strong for the home team for an 8-6 lead. Then, Boston came up to bat and hit it out of the park.  Noll, Puch, and Eddy won the day, 9-8, ending Boston's five-year drought.

The match concluded with the Veuve Clicquot Champagne Toast & Trophy Presentation, as well as an autograph signing to meet the players. The 2011 Newport vs. Boston Perpetual Trophy was presented by Melissa Bassett of Brahmin, the presenting sponsor of the 28th season of the Newport International Polo Series

During the match, a lucky individual from Florida won a special gift from Brahmin in the weekly door prize drawing and an automatic entry into the Turkish Airlines Grand Prize Drawing at the Finals to win a trip for 2 anywhere in the world!  Also, the Stella Artois Tailgate Contest awarded a fabulous prize to a lively group of spectators from Bryant University.