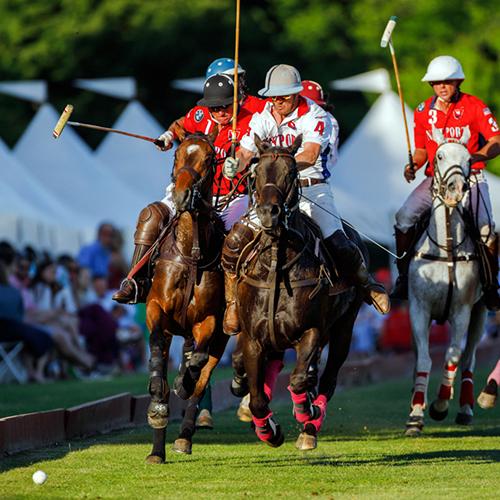 The weekend match was a battle between young and old, delivering an exciting game between NEWport vs. OLDport. Both teams put up a strong fight for this year's Newport Cup title, but the NEWport players had fire in their bellow to avenge last season's loss.

Representing the OLDport team were players Roger Souto at #1, Michel Nseir at #2, Dan Keating at #3, and Dave Bullis at #4. The opposing team, NEWport, fielded Tim Day/Lauren Bilsky at #1, Jenna Davis at #2, Minnie Keating at #3, and Hamish Wates at #4.

NEWport got the ball rolling with M Keating scoring the first two goals, followed by a repeat goal by Wates. Bullis put OLDport on the scoreboard but NEWport kept right on scoring with another point by Wates. The game started to heat up as OLDport scored two points by D Keating and Souto by the end of the second chukker. Wates started the third chukker with a goal but was quickly taken over by the OLDports who went on to score three more points, one by Bullis and two by D Keating. Neck and neck, the first half ended with a goal by Davis which tied up the score at 6-6.

NEWport entered the second half with a mindset on breaking the tie and taking over the game with four goals in a row. Wates scored the first goal following Day and then back in the hands of Wates making two more goals. D Keating scored his fourth goal of the game before it switched to NEWport where Davis made another goal bringing the score to 11-7 with NEWport in the lead. OLDport, faced with a tough challenge to keep up with their youthful opponents scored two more goals by Bullis and D Keating while NEWport made no moves in the fifth chukker. Opening with Bullis scoring for the OLDsports was met by Wates making the final two goals of the game to secure the trophy for NEWport, with a final score of 13-10.

The match concluded with the Veuve Clicquot Champagne Toast & Trophy Presentation, as well as an autograph signing to meet the players. The Newport Cup trophy was presented by Lindsey Davitt from Davitt Inc.

During the match, a lucky first-time attendee won the Door Prize of a magnum of Veuve Clicquot Champagne and an automatic entry into the Turkish Airlines Grand Prize Drawing at the Finals to win a trip for 2 anywhere in the world!  Also during the match, the Stella Artois Tailgate Contest awarded a fabulous prize to a lively group of spectators recreating a sharkie beach!

Dating back more than 130 years in Newport, the polo matches are one of Newport’s grandest & most popular traditions, a living legacy from the Gilded Age, and open to the public. Audiences of several thousand spectators enjoy the contests against international teams, as well as teams representing major US cities, playing against the home team every Sat, June thru Sept. at 5 PM / 4 PM in Sept.

There's no sport like polo. Be a part of it!  Newport Polo hosts the Newport International Polo Series 28, and is the home of America's first polo club, est. in 1876, offering public exhibition matches, polo club member services for grass & arena polo, and polo instruction year-round; founding member of the United States Polo Association,