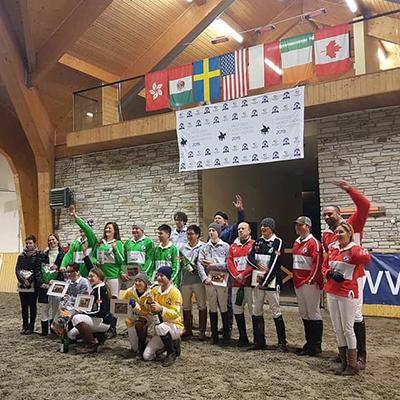 While some players competed at sea level in Beach Polo, Team USA headed to the opposite extreme, ascending the Bieszczady mountains in Poland to participate in the 12th annual Bieszczady World Snow Polo Masters.  The four-day tournament took place on February 22-24, highlighted by enthusiastic crowds and a dazzling lineup of post-polo events in the alpine resort.

Competitors representing Poland, Canada, Mexico, Sweden, Ireland, Hong Kong, and, of course, the USA proved fast friends off the pitch, but fierce opponents when the ball was in play.  Play commenced on Friday with an unusual twist, no snow!  The lack of ground cover meant the three-day tournament would be contested in the world-class indoor polo arena of the Buksza Polo Club.  Spectators watched from the viewing booth on high as eight teams battled it out in 16 bouts to determine the victor.  In the end, USA claimed a respectable 2nd place, edged out by the host country, Poland.

Bieszczady Snow Polo Masters is distinguished as the only international snow polo event dedicated to competition between amateur players.  Played in the style of arena polo, normally, teams of three compete in a 400’ x 150’ outdoor frozen, snow-covered arena in high altitude conditions of the Bieszczady Mountains.  Footing made from compacted snow makes play technically challenging.  Quick reflexes and expert riding skills are put to the test by uneven and changing surfaces conditions that can send the ball bouncing in unpredictable directions, with more frequent changes in possession of the ball.

16 players and over 50 horses journeyed to the Arlamow mountain resort to take part in this year’s tournament, attracting top sponsors and a sizeable spectator crowd.  Along with the polo matches, there was plenty of skiing thanks to expert snowmaking efforts, an extensive spa with numerous saunas, swimming pools and more, exciting post-polo events, and team bonding and international fraternity & goodwill.