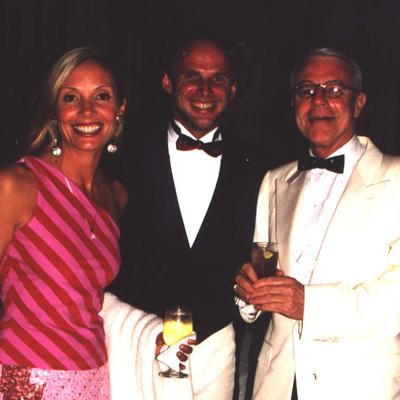 In the last week of June 2001, polo players and enthusiasts from around the Northeast United States gathered in Newport, R.I. for the polo party of the summer. Celebrating the birth of Polo in America in 1876 and the world’s first international polo tournament match between Hurlingham of England and Westchester of the United States for the Westchester Cup 10 years later, the Westchester Polo Club based, known today as Newport Polo, staged USPA Centennial Cup eight-goal and zero goal tournaments and a Gala Ball.

Present for the 125th Anniversary festivities were representative members from the nation’s oldest polo clubs: Meadowbrook, Myopia, Philadelphia, Harvard, and Yale. As well as the President of the United States Polo Association David Cummings and the Executive Director of the Museum of Polo and Hall of Fame, George du  Pont, Jr.

The tournaments were played at the polo club’s facility at Glen Farm in Portsmouth, Rhode Island on fields that are used for the regular international matches staged there all summer.  The Newport International Polo Series, under the direction of president Dan Keating, has revived the tradition of invitational international matches that began with the first international match for the Westchester Cup in 1886.  Every summer teams from England, Argentina, Spain, Australia, Ireland, England, France, Argentina, Chile, and other nations come to Newport to play in front of the large crowds that gather to watch the matches.

The tournament teams formed up into four zero-goal teams and two eight-goal teams, which culminated in the eight-goal final between Newport and Buckleigh on Saturday, June 30.  The Newport team of Dan Keating, Jonathan Kaye, Leo Mandelbaum, and four-goaler John Wigdahl put on a spirited display of fast polo for the fans and managed to outpace and outscore their opponents with a final victory tally of 12 to 11.  Their opponents, riding under the colors of the Buckleigh Polo Club Farm and starring Sebastian Bonorino, Peter Luke Williams, David Halliday, and Peter Bibeau kept the game close but were unable to break through at the end.  Playing a strong four, Kaye blocked many determined charges, while making several dramatic saves in the Newport goalmouth.  With Wigdahl, Mandelbaum, and Keating playing the attacking forwards, Newport was repeatedly able to make use of accurate passing to position their men for quick scores.  Buckleigh Farm’s Bonorino rated a solid three, showed flashes of brilliance that kept his team in the hunt right to the end.

Holding a replica of the Westchester Cup over their heads during the awards ceremony following the finals, the Newport team received cheers from the crowd and hearty congratulations on their victory in this celebration of the club’s 125th anniversary.

The zero-goal tournament began with a round robin on Friday, June 29 with the finals and consolation round on Sunday the July 1. Comprised of visiting teams and Newport Polo Club members, the teams played a round-robin format of four-chukka matches, with the two top teams moving on to the finals.  Closely fought matches made for exciting play between players some of whom know each others’ games well.

If the polo was fast and fun, the 125th Anniversary Gala Boots and Black Tie Gala Ball brought all the players and many fans together for an evening of merriment, good dining, and dancing.  More than 200 attended the event which event that was held at The Astor’s Beechwood Mansion.  Music was provided by a 12 piece band which propelled the dancing well into the wee hours of the night.

A vital part of the 125th Anniversary celebrations was a fundraiser during the Gala Ball for the Polo Education Foundation of Newport. The monies raised through a silent auction were used to promote equestrian training and polo in the community.

The Newport Polo Club is the oldest polo club and one of the oldest sports clubs in America. Now in its 125th year, the club has an illustrious past, strong traditions of bringing polo to the community and a very promising future.