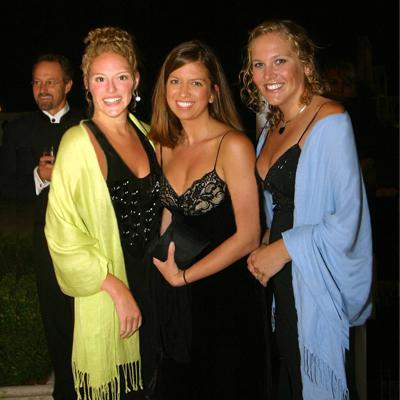 The Newport Polo Club’s annual International Polo Ball on Friday, September 1st, was a sellout and runaway hit for the 6th year in a row. The annual black-tie charity gala themed the British Invasion, took place at the exclusive Beacon Rock, one of Newport’s most glamorous private mansions overlooking the harbor. Nearly 200 guests arrived via water taxi or shuttle through the estate’s Olmstead-landscaped grounds, dressed in 60’s-era inspired formal wear to dance the night away to Help, Boston’s most authentic Beatles rock band.

Cocktails and dinner were enjoyed from terraces overlooking the harbor and glittering arches of the Pelham Bridge, with an added surprise fireworks display. A gourmet feast fit for a king was prepared by Tom’s Market of Coventry who transformed the dining room into a bountiful garden of Eden.
A live auction and entertainment ensued in the dramatic setting of the greek-revival white marble courtyard surrounded by its monumental colonnade and canopied by a giant, flapping Union Jack.

Guests of honor included Nicholas Colquhoun-Denvers, London’s Ham Polo Club chairman, and his wife Annie, along with English teammates Mike Trippett, Edmund Higgenbottom, and Marianella Castagnola, one of the top women players in the world, who were celebrated for England’s globalization of the sport of polo and for its legendary rivalry with USA which began in Newport more than a century and a quarter ago.

Gala co-chairs Agnes and Dan Keating added, “We are thrilled to host the English polo team on this occasion for bringing an exciting team to Newport year after year, and whose legacy includes spreading the great sport of polo to all corners of the globe, including Newport, at the height of the British Empire, and we salute their heritage in the Westchester Cup tradition, polo’s most famous international rivalry which began in Newport in 1886”.

Proceeds from the gala & auction benefit the Newport Polo Education Foundation (NPEF), a non-profit 501[3]c organization registered in Rhode Island with a mission to support and develop training and educational programs surrounding the sport of polo, as well as other charitable causes. NPEF Chairman John Gelati adds, “We are dedicated to the endurance of this culturally significant sport here in Newport and to our tradition of international competition. We are grateful to the community for supporting Newport’s polo tradition.”

Festivities continued the following day, Sat., Sept. 2nd with a Tribute Match between USA and England in the Newport International Polo Series at Glen Farm. Under threatening skies, USA defeated England 11 to 10, despite being led by England into the fifth chukka.

Beacon Rock’s spectacular panoramic views of Newport Harbor are but one of many breathtaking features of the classical manor designed by Stanford White of NYC’s legendary McKim Mead & White architectural firm in 1891. Restored in 1997 by its current owner, Brian Cunha, the 22,000 square foot residence integrates a monumental colonnade central courtyard and flanking temple-like wings affording water views from nearly all of its 16 principal rooms. The landscaped grounds were designed by Frederick Law Olmsted.