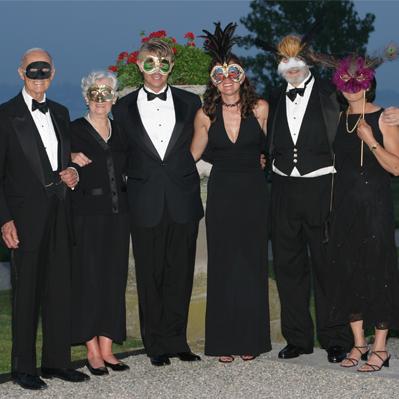 The Newport Polo Club and friends embarked on an Emerald Odyssey to recount the simultaneous history of the sport of polo in Ireland at Newport’s annual International Polo Ball and benefit polo match, on July 23rd & 24th during the 2004 season.

The gala, a masked black tie affair, took place at Ochre Court on the evening of Friday, July 23rd, 2004, with cocktails, dinner, dancing, and live auction and entertainment to benefit the Polo Education Foundation of Rhode Island.

On Saturday, July 24th, the Irish Polo Team faced off against USA in the Newport International Polo Series at 5pm on the polo grounds of Glen Farm

Gala co-chair Jim Garner stated, “As the successors to the oldest polo club in America, we are dedicated to the endurance of this culturally significant sport here and to our tradition of international competition. We are thrilled to host Ireland and celebrate our collaborative polo histories with an Emerald Odyssey.”

The first polo club in Ireland was founded in 1873 and resided on the “Nine Acres” in Phoenix Park outside Dublin. Three years previously, the first authentic game of polo in Ireland was played on Gormanstown Strand, County Meath, where Meath beat the 9th Lancers of the British Army that was at the time quartered in Ireland.

It was the infamous Captain Candy and his 9th Lancers who introduced American publisher and Newporter James Gordon Bennet Jr. to the sport of polo around the same time, having recently brought the sport from their tour in India, which led to the birth of American polo in Newport in the same decade.

Like their American counterparts, Irish players and ponies had a full share in the development of polo in the western world. An article in “The Irish Times” of September 18, 1909, by T.F. Dale, notes that the Irish player John Watson, who captained the famous Freebooters, brought the backhand stroke into general use. Ireland also supplied two of the four players who won the first Westchester Cup in 1886 in Newport, an event which launched Newport as the sport’s international capital for a generation.

On the following day, Saturday, July 24th, the Newport International Polo Series offered a benefit polo match featuring USA vs Ireland, followed by a field-side trophy presentation and dinner reception. The Irish team, a crowd favorite, returned to Newport with a 6-6 record against USA in their previous contests over the past 12 years.  The Newport International Polo Series takes place at historic Glen Farm, once an 800-acre manorial farm founded in the 1500s, whose remaining 100 acres include the polo field and classic stone barns built at the peak of the Gilded Age.

Proceeds from the weekend benefited the Polo Education Foundation, a non-profit501[3]c organization registered in Rhode Island with a mission to support and develop training and educational programs surrounding the sport of polo.

Polo, the world’s oldest team sport, was invented in High Asia at some time during the Mongol era, artifacts of which date as far as 6th – 8th century AD. GenghisKhan (1161 – 1228) employed polo as one of the official training techniques for his formidable light cavalry. With the westward spread of the Mongol Empire, polo was carried to Persia and India and many other kingdoms all over Eurasia. During times of peace, the princely game was played by teams of Indian Maharajas who competed with the officers of the British cavalry, and through the latter polo finally reached England in the late 18th century.

Polo’s aura of superb horsemanship and aristocratic magnificence made it the ultimate sport of gentlemen, and as such its popularity spread throughout the British Empire. In 1873 the first polo club in Europe was founded in Ireland, and in 1876 the first polo club in America was founded in Newport. By the 20th century, it had become a truly international game, played all over Europe, Asia, Africa, and the Americas.

The predecessors of the Newport Polo Club, called the Westchester Polo Club, established Newport as the international capital of polo from the late 1800’s until the outbreak of WWI by inaugurating the famous Westchester Cup, a rivalry between the US and Britain, whose coveted prize and prestige have become a part of polo legend in 14 historic contests over the past 116 years. It was one of the first international sporting events in modern history, predating the resurrection of the Olympic games.

After the war years, international polo did not return to Newport until 1992 with the Newport International Polo Series. The Newport Polo Club remains registered with the United States Polo Association under the historic Westchester name.