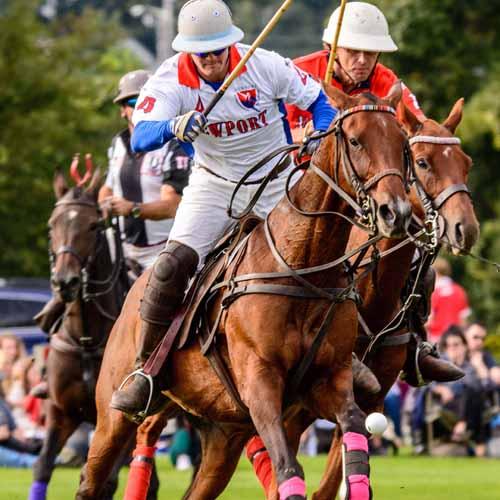 Divided into a team of Masters against Juniors, the veteran players in hometeam red uniforms were Dan Keating at #1, Dave Bullis at #2, Rory Torrey at #3, and Peter Friedman at #4, from Newport.  The Juniors in white uniforms were Tim Day in the #1 position, Heather Souto at #2, Minnie Keating at #3, and Hamish Wates in the #4 position.

The much-anticipated match was a spectacle of logistics, skill & horsepower, with both sides well prepared with defenseman guarding the goals, and captains launching attack squads. Wates put the optimistic opening point onto the jumbotron, neatly matched by Torrey to end the first period tied 1-1.  Souto reclaimed the Junior's lead in the 2nd chukker but Torrey remained consistent with his second goal of the match, for a 2-2 tie.  The Masters went on a rampage in the 3rd period, converting two penalty shots into points, and field goals by Torrey, Bullis and D. Keating for a decisive 7-3 lead ending the first half.

After the time-honored halftime tradition of stomping the divots, the match resumed with the Masters on defense through the 4th chukker, allowing a goal by Wates to chip away at the deficit, trailing 7-4. Torrey scored his 5th point of the match in the fifth chukker as the Masters nullified the Juniors' offensives and padded their lead 8-4.  Juniors Wates, M. Keating and Souto came out swinging in the final chukker, determined to reverse their fate with a goal each, raising the spectre by closing within a point of the leading Masters, until the buzzer sealed the 8-7 victory for the Masters.  Appreciative fans lauded the players with ovations as they circled the stadium for a 'high five' salute.

The match concluded with the Veuve Clicquot Champagne Toast & Trophy Presentation, as well as an autograph signing with the players.  Presenting the Commander JP Leavitt Cup - (a Paul Revere replica liberty bowl, symbolic of the New England region) was Dave Markell, Polo Club Manager, to the Masters who hoisted their victory trophy high over the crowd during the celebration before filling it with champagne and sharing a symbolic drink of friendship among all the players.  Each member of the winning team received a commemorative gift, courtesy of Flint & Flame, purveyors of professional grade, precision culinary tools.

During the match, a weekly door prize drawing awarded an Aerial Mansion Tour from Newport Helicopter Tours to a Johnston, RI patron, while the Best Tailgate - an Autumn celebration in the chalets - earned the coveted prize from Stella Artois and a moment of fame on the Jumbotron.  The hospitality and vendor villages bubbled with unique offerings from fascinators and jewelry to designer sunglasses, portrait photography, professional cutlery, leather goods, old & new world wine sampling, the 2018 collection of official polo team gear and concessions including gourmet Food Trucks and the Twisted Pony Cocktail Bar, while this season’s new sensation, the Veuve Clicquot on The Go champagne cart circled the field with bubbly service!

Stay current with the 2018 team lineup, latest news, events and more through our e-Magazine, by subscription to our monthly Emagazine (sign up) and out Gameday Scorecard (sign up).  Both subscriptions are private and spam free.

There's no sport like polo. Be a part of it!  Newport Polo hosts the Newport International Polo Series 27 and is the home of America's first polo club, est. in 1876, offering public exhibition matches, polo club member services for grass & arena polo, and polo instruction year-round; founding member of the United States Polo Association,