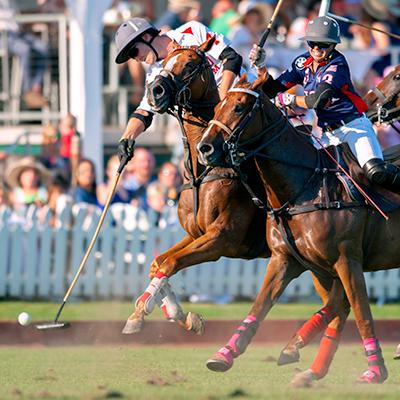 England embarked on its 26th campaign against USA on Saturday, September 1 for the annual Labor Day Weekend challenge in the NBC10 Newport International Polo Series 27, presented by BMW.  Jet-lag, followed by an all-night tour of the Newport social scene left the England players with thick heads that even a builder's tea couldn't clear.

Representing England were Matt Jones at #1, Garrie Renucci at #2, Stephen O'Kane at #3, and Jimmy Wood at #4.

USA fielded Minnie Keating in the #1 position, Michel Nseir at #2, Heather Souto at #3, and Rory Torrey at #4.

The English team was still shaking off the previous night's follies as the umpires threw the ball in.  Immediately, Torrey went on the attack for USA to handily win the first goal.  Souto quickly followed to close the first chukker 2-0.  Torrey carried the momentum into the second chukker with a neat penalty conversion, followed by two goals from Souto in regulation play.  As half-time closed in, England finally got in the game.  Wood made two penalty conversion to put England on the board, but Torrey made a conversion of his own to sweep the first half 6-2.

A strong thrust by Souto opened the second half with USA up 7-2.  Wood won a charge to goal for the first point by England scored in regulation play, but Keating closed the chukker with another goal for USA.  England appeared to be snookered as the fourth chukker started, but then, Wood made an impressive comeback, scoring three goals to USA's one, drawing nearer, 6-9 in favor of USA.  England came alive in the final chukker with goals by Wood and Renucci that closed the gap within one point of USA.  Then, Torrey took one back to widen the margin once again.  O'Kane managed one more point as the clock ran down, coming in too late to put a tied game within reach.  USA reclaimed the silver, 10-9.

During the match, a lucky winner took home a magnum of Veuve Clicquot champagne in the weekly door prize drawing, and the Stella Artois Tailgate Prize went to a lively gathering sporting colors to cheer on both teams and a gilded equine centerpiece that set the party apart from the crowd.  Specialty vendors and concessionaires in the Vendor & Hospitality villages around the polo grounds served up the grilled fare, chilled fare, seafare, jewelry, sunglasses, cutlery, wine sampling, polo team gear and more.

The match concluded with the Veuve Clicquot Champagne Toast & Trophy Presentation, as well as an autograph signing to meet the players.  The 1992 USA vs. England Trophy was presented by England Team Host Ron Flemming and Lord Mayor of Portsmouth, UK Lee Mason.

Stay current with the 2018 team lineup, latest news, events and more by subscription to our eMagazine (sign up) and get match details from the Gameday Scorecard (sign up).  Both subscriptions are private and spam free.

There's no sport like polo. Be a part of it!  Newport Polo hosts the Newport International Polo Series 27, and is the home of America's first polo club, est. in 1876, offering public exhibition matches, polo club member services for grass & arena polo, and polo instruction year-round; founding member of the United States Polo Association,