140 Year Celebration of Newport vs. Buffalo 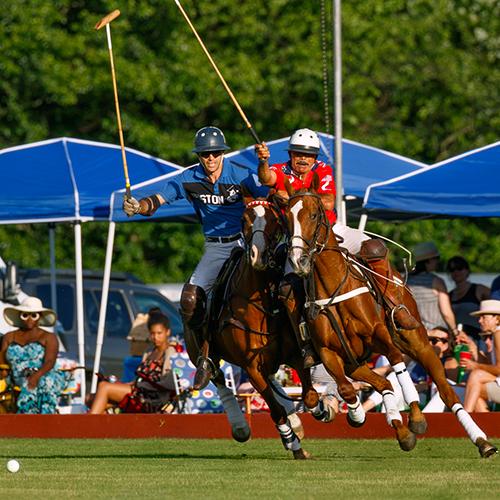 American polo's oldest rivalries are reignited in Newport this summer, marking 140 years since the first interclub match between Newport and Buffalo, featuring challengers from the East Coast's major polo hubs, for high-scoring matches in the 2018 City Series.

We may have shared a collective gasp at the only Super Bowl turnover, but Boston and Newport share a pre-revolution rivalry that’s been on a low simmer since the 1600s.  Boston became the first Polo Series City Series challenger in 2011, and the teams have dueled every year since.  Boston is poised to make a comeback this season, ending Newport's dominance on the leaderboard to bring the revere bowl back to its origins in the Commonwealth on June 23.

One Pennsylvania city may have triumphed over our local favorite, but Pittsburgh has yet to claim our silver prize since its 2016 debut.  The steel city has tested its metal twice against Newport, but hit a brick wall in both matchups.  Pittsburgh's stainless team returns on July 14th to claim victory and carry off a bit of Newport's silver.

Palm Beach rose as the second playground for America's rich during the infamous gilded age.  Naturally, the buccaneering class's new sporting pursuits followed and polo took root in the friendly southern climate.  Palm Beach may have a breezy and carefree reputation, but as an epicenter of polo in America, its teams prove the toughest challengers in the annual lineup.  Newport is defending the castle (or 'cottage' as they're called in town) on July 28, after its decisive win last season.

Buffalo shares a similar story of humble beginnings with Newport, until the rising tide of the 1800s brought the nation's elite to their shores.  The economic engine of Buffalo drew the same wealthy industrialists that summered in Newport, where once again, they established sporting clubs.  The first American polo match was staged in Newport, challenged by the newly formed club in Buffalo.  140 years on, Buffalo is riding on Newport to replay the first interclub polo match in America on August 11.

After a four-season shutout, Newport finally cored the competition and is ready to take on the Big Apple once again.  New York makes it reprise on August 25th, set for a thrilling chase to victory.

Baltimore continues to lead Newport since its 2014 debut, with a team that included TV Personality, John Walsh.  The leaderboard has Baltimore hanging on to a scant margin, putting the cup within reach of Newport on September 9th.

Inaugurated in 2011 as part of the 20th anniversary season, fans can witness the 6 rivalries unfold from the best seats in the house, in the Positive Energy Polo Lounge, a chic entertainment enclave hosted by ALEX AND ANI exclusively for City Series matches.  Stay current with the 2017 team lineup, latest news, events and more through subscriptions to our Game Day Scorecard (sign up) and our weekly Emagazine (sign up).  Both subscriptions are private and spam free.  Secure your seat today: Schedule & Tickets.