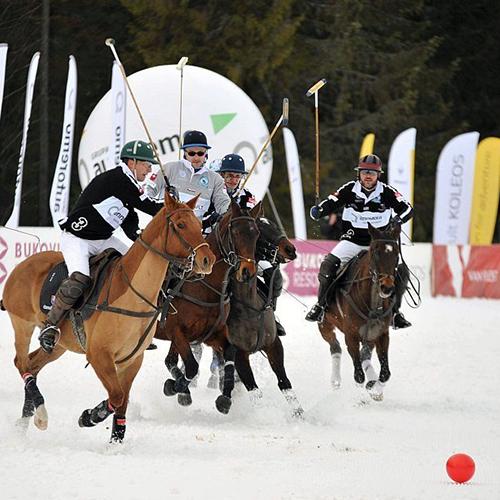 Team USA is back at sea level after competing against 7 teams of global competitors at the 11th annual Bukovina Snow Polo Masters.  The four-day tournament took place from January 19-21st, highlighted by enthusiastic crowds and a dazzling lineup of post-polo events.

Competitors representing Poland, Slovakia, Switzerland, Netherlands, Austria, Hungary, Czech Republic, and, of course, the USA proved fast friends off the pitch, but fierce opponents when the ball was in play.  Play commenced on Friday with a brief warm-up on the tundra, then, bracketed match-ups between the teams.  USA's men started strong, despite being the only team on unfamiliar mounts.  Two wins positioned USA for a podium finish, but Switzerland edged the win to take third.  The Czech Republic took second, and the host nation, Poland, stood tallest on the podium with its first-place finish.  After prize giving, the teams retreated inside the resort for a private fashion show, followed by a farewell dinner.

Bukovina Snow Polo Masters is distinguished as the only international snow polo event dedicated to competition between amateur players.  Played in the style of arena polo, teams of three compete in a 400’ x 150’ outdoor frozen, snow-covered arena, competing in high altitude conditions of the Tatra Mountains at the Polish ski resort of Bukovina.  Footing made from compacted snow makes play technically challenging.  Quick reflexes and expert riding skills are put to the test by uneven and changing surfaces conditions that can send the ball bouncing in unpredictable directions, with more frequent changes in possession of the ball.

26 players and over 50 horses journeyed to the mountain resort to take part in this year’s tournament, attracting top sponsors and a sizeable spectator crowd.  Along with the polo matches, there was plenty of skiing, a thermal swimming pool, exciting post-polo events, team merrymaking, and a little added international competition on the bowling lanes.