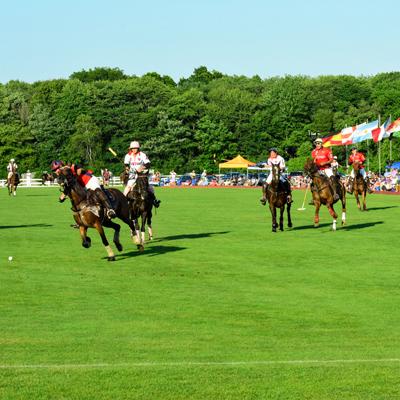 It was all good times for good causes this Sunday, at the Newport International Polo Series second annual All Charity Day, a special highlight of the 26th season.

Spectators were treated to an incredible “battle of the sexes” match between local Newport players, plus activities hosted by the 22 charities there.  Everyone wanted to join the raffles for a chance to win one of the many awesome gift baskets that were available, and place their bids in the silent auctions. There was so much to do and see, and for most it was their first time witnessing a polo match.

Representing the Men’s Team, in position #1 was Lars Wahlberg with Alexander King as his alternate, playing #2 was Michel Nseir, position #3 was Brendan Tetreault, and position #4 was Sam Clemens.

Both teams demonstrated excellent defensive skills during the fourth chukker as there were no goals scored. The Women scored the only goal of the fifth chukker bringing the score to 7-3 going into the final chukker.  Nseir scored the first goal of the final chukker but the Women answered with two goals by Rice. The Men put up a good fight but could not match the goals scored by the Women who ran out the victors with a score of 9-4.

Special thanks to the Boy Scouts of America for goal judging during the match.

Through its 26 year history, Newport Polo has raised over $1,285,500 for civic and charitable organizations. Initiatives include the International Polo Charity Ball, special benefit matches, and countless ticket donations for the Newport International Polo Series.