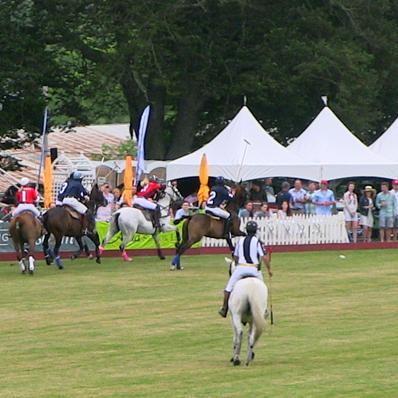 The NBC10 Newport International Polo Series, Presented by BMW featured a heated rivalry between the Red States against the Blue States, vying for the Independence Cup on Saturday, July 1st.

Representing the Blue States, in the #1 position was Michel Nseir, playing #2 was Sam Clemens, Chip Stiegler was at #3, and playing #4 was Peter Friedman.

For the Red States, Amy Rice was at #1, Brendan Tetrault was #2, Heather Souto played #3, and Minnie Keating played position #4.

During the match, a lucky winner from Duxbury, MA took home a gift certificate to the Clarke Cooke House, courtesy of Atria Senior Living, in the weekly door prize drawing. A beautiful tailgate with gorgeous flowers, patriotic decor, a mouth-watering spread of food and drink won the Best Tailgate Picnic Trunk from Stella Artois.

Following the match, the teams took to the podium for the Veuve Clicquot Champagne Toast and Trophy Presentation, where John Hartmayer of Atria Senior Living presented the victorious Red States with the Atria Cup.