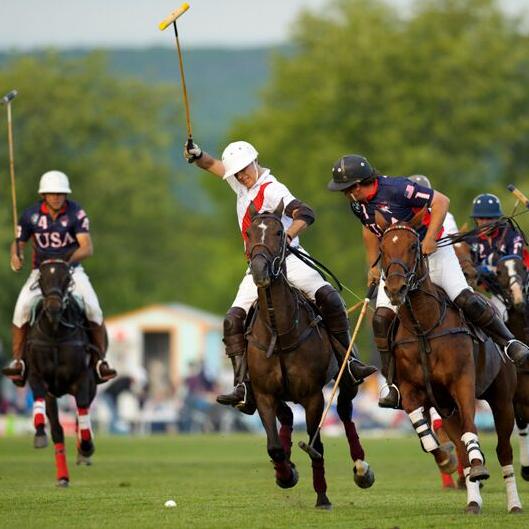 Peru made their highly anticipated debut this past Saturday, June 3rd, in the opening day of the NBC 10 Newport International Polo Series, presented by the Rhode Island BMW Centers.

Representing Peru, in the #1 position was Adrian Poblete, playing #2 was Jose Aramburú, Iago Masias was at #3, and playing #4 was Santiago de Osma with Rodrigo Viejeux as his alternate.

For USA, Minnie Keating was at #1 with Rory Torrey as her alternate, Sam Clemens was #2, Chip Steigler played #3, and Captian Dan Keating played position #4.

Peru started off their debut game with a goal by Masias that was answered with a goal from Steigler. Peru gained momentum and Masias scored two more goals before the end of the first chukker bringing the score to 3-1 in favor of Peru. Team USA fought back in the second chukker with consecutive goals by  Clemens and  D. Keating, bringing the score to 3-3 going into the third chukker. The final chukker of the first half was in favor of Peru as they scored three consecutive goals by Poblete, de Osma, and Masias bringing the score to 6-3 with Peru in the lead going into the second half.

Newport started the second half of the game with one goal from Clemens in both the fourth and fifth chukker,  bringing the score to 6-5 with Peru in the lead going into the final chukker. Peru kicked it into gear in the sixth chukker with five consecutive goals scored by Masias, Poblete (two goals), Aramburú, and de Osma. Team USA answered with two goals scored by M. Keating and D. Keating, but it was not enough to take the win. Peru was triumphand in their first match with a score of 11-7.

During the team's visit to Newport, they enjoyed many of the best attractions and highlights in the City by the Sea. The team toured the famed Newport Mansions, enjoyed helicopter tours with Birds Eye View, paddle boarded and surfed with Island Surf & Sport, played tennis on the legendary courts of the International Tennis Hall of Fame, sailed on 12 meter racing yachts with America's Cup Charters, and enjoyed their stay at the official team headquarters, Hotel Viking, renown for superior guest accommodations, exceptional cuisine, rooftop entertainment, European spa and desirable Bellevue Avenue address..