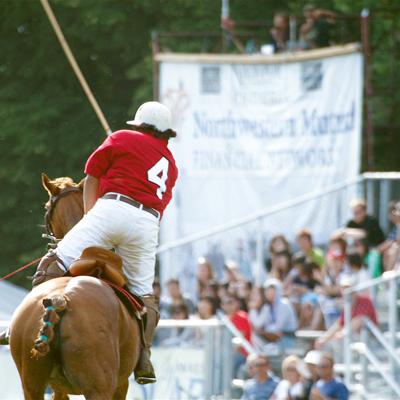 Give me liberty!  Inaugurated in the early 2000s, the Independence Cup has become a traditional celebration at Newport Polo to commemorate the 4th of July in polo’s American Birthplace.  Recent engagements have brought the “Red States” and the “Blue States” to the field for more fun than a barrel of politicians.

One of the earliest contests saw Newport Polo heavyweights representing both sides for a fair election to the winner’s circle.  A whirlwind campaign by the Red States ended in a landslide victory.  Half a score on, the congress of players shows many familiar faces, but their political arena has certainly undergone some renovations with the addition 14 more flags representing the 33 international challengers to date that have competed in Newport, the construction of the Pavilion and Announcer’s Tower, installation of Tailgate Chalets, and inauguration of countless new traditions.  One thing that hasn’t changed, polo is a fun summer afternoon for friends to gather in good company.  Here’s a look back at the 2007 Independence Cup.  Can you spot yourself?!