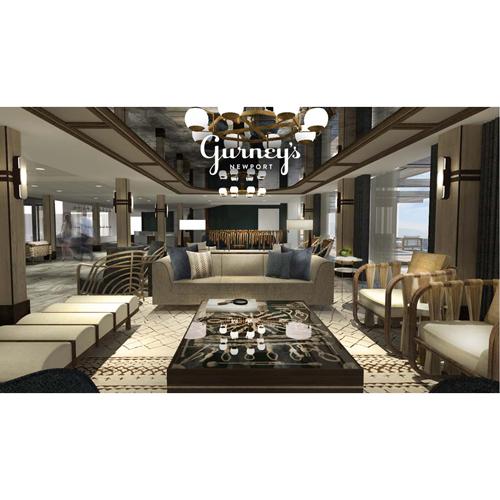 The Newport International Polo Series is pleased to announce its partnership with Gurney's Newport Resort & Marina as an International Team Sponsor for the 26th season.

Situated on Goat Island and surrounded by picturesque Newport Harbor and Narragansett Bay, Gurney’s Newport Resort & Marina offers the seclusion of a private island while being a short walk from the heart and history of the charming waterfront cobblestone streets of Newport. Our waterfront resort is centrally located to the area’s abundant attractions and activities, which include great restaurants, landmark mansions, museums, vineyards, golf courses, beaches, state parks, scenic walks, musical and theatrical performances, cruises and more.

Expansive grounds offering 360-degree water views provide an ideal setting for our various dining options, entertainment, wellness, waterfront spa treatments, family fun, and secluded shoreline cocktails featuring the best sunsets in Newport. Because we offer 257 guest rooms and more event space than any other property in Newport, Gurney’s Newport Resort & Marina is a popular destination for all sorts of stylish business and social gatherings, as well as truly memorable weddings Whether you are traveling for business or pleasure, staying for a weekend or a week, we think you will love our gorgeous location, in the “City by the Sea.”

Minutes from downtown Newport, the International Polo Grounds are located at historic Glen Farm, 250 Linden Lane (off of Rte. 138) in Portsmouth, RI. This bucolic setting is the last 100 acres of what was once a 700-acre manorial farm whose settlement dates back to the 1600's. Its classical stone barns from the Gilded Age and its park-like grounds were rehabilitated by polo series founder, Dan Keating, and thrive today as an equestrian & community recreational property, and home of the Polo Series.

There's no sport like polo. Be a part of it! Newport Polo hosts the Newport International Polo Series XXVI, and is the home of America's first polo club, est. in 1876, and a founding member of the United States Polo Association, offering public exhibition matches, polo club member services for grass & arena polo, and polo instruction year-round.