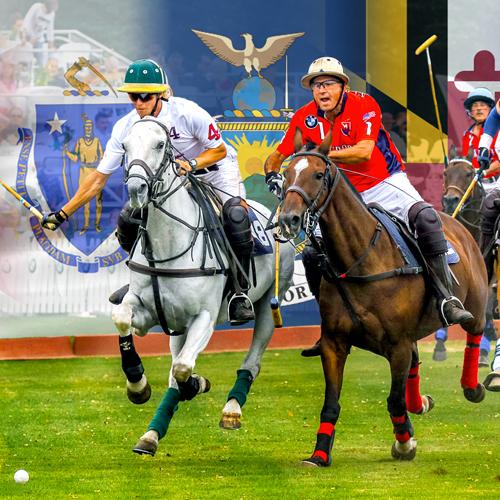 Top East Coast contenders are sailing on Newport for the 2017 City Series.  With polo’s major hubs concentrated on the eastern seaboard, teams are eager to return to polo's American birthplace, challenging the home team in fast and furious 6-chukker matches.

We may all be Patriots fans, but Boston and Newport share a pre-revolution rivalry that’s been on a low simmer since the 1600s.  Boston became the first City Series challenger in 2011, and the teams have replayed the annual duel every year since.  Newport has been on a recent winning streak, leading 4 wins to Boston’s 2.  A team of seasoned Polo Series veterans is returning to represent their home city of Boston, and they’ll be out to bring the revere bowl back to its origins in the Commonwealth on June 24th.

Pittsburgh became the eighth City Series contender during the 25th anniversary of the Newport International Polo Series.  Newport’s best efforts to wear the new team out the night before the match had the intended effect.  While Newport took round one, the Pittsburgh players will be on their guard and in excellent form to meet this year’s challenge on July 15th.

Sister resorts, Palm Beach and Newport will have their sixth rumble on the polo field on July 29th.  Built as a Gilded Age social epicenter, the two cities share a similar history, and strong polo tradition, making them close competitors on the field.  Newport will have to bring its best offensive to break Palm Beach's hold on the perpetual cup.

The nation’s former capital returns on August 12th as Philadelphia makes its sixth City Series appearance.  Philadelphia and Newport remained in lock-step, with an even win-loss record, until Newport broke the stalemate with two consecutive wins in 2015 and '16.  The Philadelphia congress has decreed a victory for this season and is sending its top delegation to meet the challenge.

The New York heavyweights will face Newport on August 26th, adding another chapter to the long polo legacy shared by both locals.  The annual match-up always proves a thrilling chase that ends with one of the highest scores of the season.  The team from the Big Apple has proven hard to swallow, but Newport is training hard to take a bite out of the competition.

Baltimore will take to the field on September 9th for its second City Series engagement.  The 2014 team, which included TV personality, John Walsh, made a strong showing, playing a strategic game to edge the home team 9-7.  The ever resilient Monument City will be out to defend its title and keep the Liberty Cup within its borders.

Inaugurated in 2011 as part of the 20th anniversary season, fans can witness the 6 rivalries unfold from the best seats in the house, in the Positive Energy Polo Lounge, a chic entertainment enclave hosted by ALEX AND ANI exclusively for City Series matches.  Stay current with the 2017 team lineup, latest news, events and more through subscriptions to our Game Day Scorecard (sign up) and our weekly Emagazine (sign up).  Both subscriptions are private and spam free.  Secure your seat today: Schedule & Tickets.