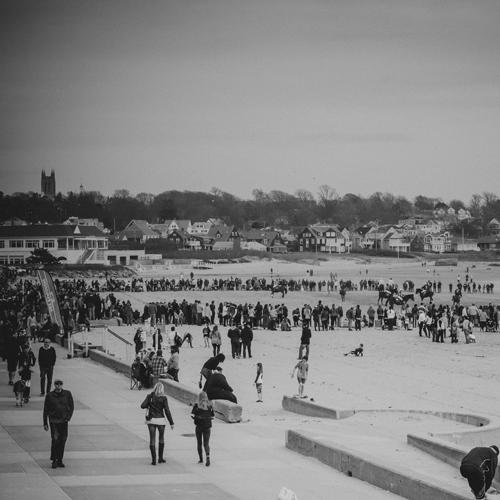 Sunny skies and pleasantly warm weather greeted the Newport Polo players and fans for the 6th annual Beach Polo exhibition on Feb. 25 & 26, part of the Newport Winter Festival.  The two day event, played on the sands of Easton’s Beach in Newport, brought four teams to compete in the first game of 2017, in one of New England’s prettiest settings.

Day 1: The team in Blue, Captained by Minnie Keating (#3), with Brian McCormick (#1) and Sam Clemens (#2) faced the team in Yellow, Captained by Dan Keating (#3), with Carlos Silvera (#1) and Margaux Buchanan (#2).  D. Keating for Yellow, and Clemens for Blue led off the tightly played match for a 2 all tie in the first chukker.  Thanks to Clemens and M. Keating, Blue edged the lead, 6 to 5 as the fogged rolled in during the second chukker.  Eager to regain the lead, D. Keating, and Erik Christianson (subbing in for Buchanan) tied the game at 8-all, as the teams left to change their horses for the final chukker.  With little wind, and the fog clearing, conditions were perfect for a thrilling match ending.  Shots put to goal were stolen from the mouth, until the buzzer sound the chukker’s end, with a 9-9 tie.  The crowd, players and commentator were all hungry for a winner, sending the match into sudden death overtime.  In a swift breakaway, D. Keating earned the win for Yellow, 10-9.

Day 2:  Familiar faces in Blue, Laurel Howe at #1, Sam Clemens at #2, and Minnie Keating at #3 took on the Yellows, Carlos Silvera at #1, Erik Christianson at #2, and Dan Keating at #3. A new chill from winds out of the west presented players with an added challenge.  Blue capitalized on its downwind advantage, with Howe opening the scoring, followed by M. Keating for a 2-0 lead in the first chukker.  Sides reversed, D. Keating tied the match at 2-all for Yellow to end the half.  D. Keating bested the Blues for a brief 3-2 lead to start the third chukker, but M. Keating tied the match, before Blue’s ringer, Patrick Quigley, finished the chukker with two more goals.  Clemens added Blue’s 6th goal to start the final chukker.  Down to the wire, D. Keating set after the win, scoring two goals for Yellow, but the buzzer signaled the game’s end, and a close 6-5 victory for Blue.

The beautiful spring like weather brought out a thousand or more fans to watch the first polo match of 2017 unfold in Newport.  Scenes of children playing on the pitch, dogs socializing, and friends enjoying an afternoon of polo painted a picture seen on summer afternoons at Glen Farm. Even the Newport International Polo Series’ beloved commentator, William Crisp stopped by to lend his voice to the day. After the match, spectators lined the playing area, arms outstretched for the first ‘sweaty hand slap’ of the season.

Over 60 fans set their cameras loose to capture the day, and enter for a chance to win Opening Day tickets to the Newport International Polo Series.  Enjoy a beautiful album of photos, and express your appreciation with LIKES for your favorites on our Facebook Fan Page (voting ends on March 21, 2017).