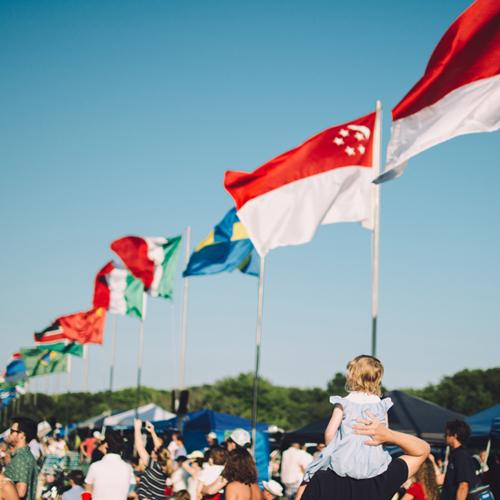 2017 brings the old world challengers, and a taste of tropical shores to Newport for a summer polo grand tour.  Peru brings us to new lands as the 33rd nation to make its Polo Series debut, while Ireland and England return as the longest running rivals.  The tour continues with perennial favorites making their comebacks, and the return of the Dominican Republic after a 7 year hiatus

The Peruvian Polo Team opens Season XXVI on June 3rd, making its first challenge against Team USA.  Polo was first introduced in the Latin American nation’s capital in 1895 by a group of English expats.  They established the Lima Polo Club, the only club in the nation today.  With a modest membership of only 60 players, but a 120 year history, the Lima Polo Club has risen to prominence on the world polo stage, as top players from around the world travel to compete in the club’s annual tournaments.  The mild climate allows players to compete year round, making the team a tough opening challenger for USA as they are just getting back to competition form.

Riding in on last season's win, the French Polo Team returns on June 17th, captained by Newport veteran and the country's top player, Olivier Girard.  Polo has a significant presence throughout France, with a history well over a century in the making.  It has hosted the FIP World Championship of polo and has been European champion more than once.  France became the 6th nation to compete in the Polo Series, debuting in the second season, and quickly becoming one of USA toughest competitors.

Ciao Bella! The Italian Polo Team will breeze in a la Roman Holiday on July 8th, for its sixth U.S. engagement, led by Captain, Marco Elser.  The team hails from Rome, home of the oldest of Italy’s 15 polo clubs.  Italy’s modest polo community is gaining notoriety on the world stage, hosting international tournaments and besting England for bronze in the FIP World Championship.  U.S. shores have been a little less friendly as the team remains out to claim the elusive USA vs. Italy perpetual cup.

The Irish Polo Team will step out for its 26th matchup in Newport on July 22nd, led by Captain Siobhan Herbst and top players from Wicklow.  Polo was simultaneously introduced to Ireland and England, and spread widely throughout the nation.  Ireland has won 8 of the last 14 bouts with USA, but lost possession of the perpetual cup after an 18 to 10 upset in 2016, breaking its three year streak.  "By luck or by skill, the Irish team always gives us an epic game,” explained Dan Keating, USA team captain and founder of the Polo Series.  The match will conclude with an Asado Lamb Roast.

Highlighting the social climax of the polo season, the Mexican Polo Team will add fiesta flare as the guest of honor at Gala la Bamba, the 17th annual International Polo Charity Ball, then its top competitors will try to wrest the perpetual cup from Team USA at the polo match the following day.  Polo was introduce to the nation by a Mexican baronial family, after they witnessed an 1800s match in Newport.  Mexico made its Polo Series debut in 2013, racking up two wins before the tides turned for a USA victory in 2016.  The match will conclude with the annual Lobsterbake.

Beloved by fans and plyers alike, the Jamaican Polo Team returns on Aug. 19th, with veteran captain Shane Chin.  Much like other polo playing nations, the sport was established by British army officers in the late 1800s.  Today, polo in Jamaica is a family affair, with the sport being passed down through the generations.  Their skilled horsemanship and world renowned hospitality has drawn noteworthy visiting players, and is opening the sport to a new league of Jamaicans.  Friendly competition with Team USA has brought nearly even results; out of the last 13 matches the teams are neck and neck as USA scored 135 goals to Jamaica’s 133.

Hailing from the quintessential polo nation, the English Polo Team will make its annual Labor Day weekend challenge against Team USA.  The first English armada arrived in Newport for the Polo Series’ inaugural year, led by Captain William Crisp.  For nearly 20 years, England has been represented by the London Polo Club, always giving USA a run for its money.  USA may lead in total wins, but England leads in total goals, and with a two year shutout, history shows the plucky Brits are overdue to claim the silver.

The Dominican Republic Polo Team will make its second gambit on September 16th, after a seven year gap from its 2010 debut.  Polo was popularized in the Caribbean nation during the mid-20th century as its social elite began playing in the capital, establishing several polo clubs.  The Dominican Republic is relatively new in the world polo community, launching its first international tournament series in 2015, but the sport enjoys an idyllic climate for high caliber play year round.  Trailing from the loss during the inaugural match, it’s up to Team USA to bring the perpetual cup back to its home shores.