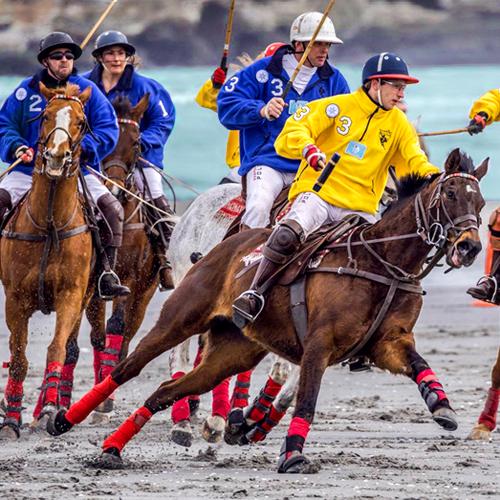 Admission and parking at Easton’s Beach is free.

The two day polo exhibition, organized by Newport Polo, will feature 2 teams competing each day in a 4 period match, 7 minutes per period.  In between periods, the players will change to fresh horses.  Each match will last approximately 1+ hour, played during low tide.  Witness the fast-paced contests and cheer on the teams played out on the breath-taking backdrop of one of New England's finest beaches!

“This event is a nice attraction for our beach during the winter season,” explains Eric Reis, Newport Beach Manager.  All regular off-season beach rules and restrictions will be in effect.  Click Here for current beach conditions.

“The Newport Polo Club is grateful to the City of Newport for its blessing, and to all who make this event possible so that people of all ages can get outdoors to take in the fresh air and spectacle of horsemanship and breath-taking panoramas on Newport’s beautiful beaches when the ponies and players put on a polo match on the sand,” adds Dan Keating, captain and president of Newport Polo.

Beach Polo is a low-impact, eco-friendly exhibition, and a much anticipated highlight on the closing weekend of the Newport Winter Festival.  Over 1,000 spectators line the playing field each day, carved out of the intertidal area of the beach.  The players are from the Newport Polo Club and other regional contenders, playing on finely tuned thoroughbred polo horses.  Horses are accustomed to sand footing in their natural habitats all over the world, including the desert southwest.  The polo ponies are highly fit and exercised in arena polo, played on similar footing materials.

This is the 29th annual Newport Winter Festival, running from February 17th to the 26th.  Over 100 events taking place throughout Newport county will be featured in 'New England's Largest Winter Extravaganza,' combining food, festivities, music, and fun for all ages.

Polo is one of the most popular attractions and oldest traditions in Newport, home of America’s first polo club, established in 1876.  The beloved tradition continues every Saturday, June – September, as teams from around the world and major U.S. cities challenge the home team in the Newport International Polo Series.  The Polo Series’ 26th season opens on June 3rd, 2017 as USA hosts the first international challenger of the year.