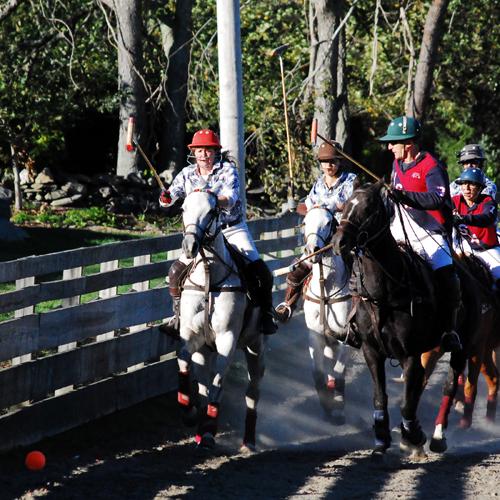 Eager for autumn season competition, Newport Polo Club and Brown University varsity team members took to the arena for the annual two day Players Tournament on October 22 & 23.  Undeterred by a little rain on day one, the teams got the high scoring competition off to a lightning start.  Adjourning for the evening Players Dinner, the action resumed on Sunday for the consolation round and finals.

Game One: Brown’s Gunbir Chada, Ilan Agar, and coach, Dan Keating (in red/white) took on the Off-Islanders, Stefanie Boyer, Patrick Quigley and Jenny Elkus (in Hawaiian).  A Brown blitz took the Off-Islanders by storm, opening up a 6-2 lead in the first chukker.  The Off-Islanders sailed on Brown in the second, closing the gap to 8-6 with Brown still in the lead.  An unfavorable wind picked up in the third chukker, sending the Off-Islanders drifting out to sea with only 2 goals to Brown’s 5.  In the fourth chukker, the tide turned against Brown, adding only 2 goals to the Off-Islanders’ 5, but, Brown prevailed, 15-13 to advance to the Final.

Game Two: Acoaxet’s Carol Gaudreau, Lars Wahlberg and Dave Bullis (in red) took on MA's Laurel Howe, Brian McCormick, and Alexander King (Navy). MA put up 3 points to Acoaxet's 2 in the first chukker.  The teams were equally matched in the second, with an interchanging volley of 3 goals apiece, for a 6-5 MA lead at the half.  Acoaxet outscored MA in the third chukker, taking the lead, 10-9, and carried that lead to the end, 16-12, advancing to the Final.

Consolation Round: MA vs. Off-Islanders – The teams kept even pace out of the starting gate, tying the first chukker 3-all. But, the Off-Islanders pulled out a 1 goal lead to end the first half.  In a surprise upset, MA made a relentless advance in chukkers 3 and 4 while holding the Off-Islanders at bay, adding 7 goals for a 12-6 win.

Final: Brown vs. Acoaxet – Acoaxet duplicated Brown’s early blitzkrieg in game one, dominating the first chukker with a 4-1 lead.  Brown was able to stem the tide in the second, scoring three more points, but Acoaxet maintained its lead, 8-4.  Brown regained its momentum in the third chukker, adding 4 points, while holding Acoaxet to 1.  With one goal between them, the teams went tit-for-tat in the final chukker until two costly penalties against Acoaxet drew the teams to 11-all.  The final minutes saw the even scoring continue, with Brown claiming the final goal for a 13-13 tie.  In the camaraderie of the weekend, the teams shook hands, ending the tied tournament with Brown and Acoaxet joint victors.