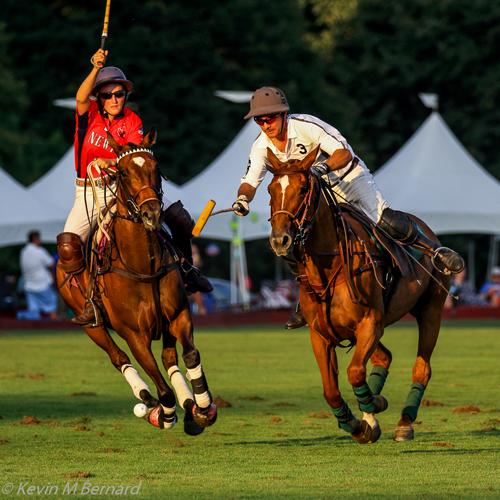 Playing for Philadelphia was Mark Mulligan at #1, Nick Wayland at #2, Leandro Berrios at #3, and Juan Vidal at #4.

Defending for Newport was Jenna Davis at #1, Charlie Bullis at #2, Pedro Manion at #3, and Dave Bullis at #4.

Newport took immediate advantage at the first throw-in, pushing the ball down field to the Philadelphia goal.  The players couldn’t quite connect, but a little nudge from a helpful mount tipped the ball over the line, drawing the first goal for Newport.  Philly struggled to break through Newport’s tight defense.  D. Bullis ended the chukker with another Newport goal, leading 2 – 0.  Ever resilient, Philadelphia rallied in the second chukker, with Wayland and Berrios besting Newport for a goal each.  Unfortunately for Philly, Manion matched the two points for Newport, and D. Bullis added another for good measure.  But, a costly foul by Newport gave Berrios the opening to score another Philadelphia goal before the before the chukker’s end.  Heading into the end of the first half, Newport was leading 5-3, and continued the advance.  C. Bullis got in on the action, making his own penalty conversion, followed by another goal during regular play.  Wayland retaliated, scoring for Philadelphia, but the half ended with Newport still in the lead, 7 – 4.

Philadelphia turned the tables in the fourth chukker with two goals by Berrios and a third from Vidal.  Meanwhile, Newport was held to a single goal by Manion, reduced to a one goal lead, 8 - 7.  The teams stayed neck and neck in the fifth, as a goal by Mulligan, was matched by Manion.  It was down to wire, with one goal in it as the teams returned for the final round.  Manion led off for Newport, adding goal number 10, and his fifth during the match.  Berrios took the advantage for another Philly goal, also making his fifth during the match.  Still leading by one point, Newport controlled the play to let the clock run down, breaking the stalemate with a 10 - 9 victory over Philadelphia.

During the match, one lucky winner took home an official Newport Team Jersey in the weekly door prize drawing.  A silver themed 25th anniversary party celebrating the Polo Series in tailgate spaces 25-27 wowed the judges, winning the Best Tailgate Picnic Trunk from Stella Artois.  Following the match, the City Cup was presented to the teams by Keith Chouinard of Hotel Viking during the Veuve Clicquot Champagne Toast and Trophy Presentation.