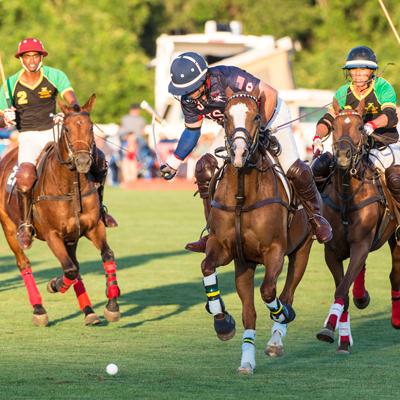 Beautiful August sunshine, and the ever popular Jamaican polo team brought out an enthusiastic crowd to catch the fast paced action as USA faced Jamaica on Saturday, August 20, 2016, in the NBC-10 Newport International Polo Series, presented by the Rhode Island BMW Centers.

For USA, Amy Rice was at 1, Dan Keating played 2, Jim DeAngelis played 3, and Sam Clemens closed the back door at 4.

With renowned horsemanship and polo skill, Jamaica got the match off to a lightning start.  Assisted by Chin and Fong-Yee, Richards scored the opening goal for Jamaica.  Young Frankie Hart, quickly followed suit, raising the Jamaican score to 2.  DeAngelis and Clemens knew better than to let Jamaica get too far ahead, and leveled the score at 2 all.  But, the tenacious Hart scored for Jamaica, ending the first chukker 3-2.  Chukker two saw an even exchange of goals by Keating and DeAngelis for USA, matched by Richards and Chin for Jamaica.  A goal each by DeAngelis and Chin maintained the one goal spread, to end the first half 6-5 in favor of Jamaica.

Now more comfortable on their unfamiliar mounts, Jamaica began a steady advance through the match’s second half.  Goals by Hart, Chin, and Fong-Yee raised the Jamaican score to 9.  Meanwhile, USA struggled to break through, as DeAngelis added a single point for USA.  USA recovered from its shaky second half start during the fifth chukker, with goals by Keating, Clemens, and DeAngelis.  But, Fong-Yee, maintained the Jamaican lead with two goals, for a score of 11-9 as the teams headed into the final chukker.  Jamaica wasted no time as Fong-Yee immediately went on the offensive, widening the team’s lead to 3 goals.  Chin followed suit, adding two more Jamaican goals.  Team USA couldn’t quite connect, and Jamaica reclaimed the perpetual cup, winning 14-9.

During the match, one lucky winner took home a $150 gift certificate to one of Newport’s most popular restaurant, presented by COX, and another took home an official Jamiaca team jersey in the weekly door prize drawing.  A jovial birthday celebration in tailgate spaces 00 & 000, featuring the Newport J House won the Best Tailgate Picnic Trunk from Stella Artois.  Following the match, the USA vs. Jamaica perpetual cup was presented to the teams by Brien Fox of Hyatt Regency Newport, during the Veuve Clicquot Champagne Toast and Trophy Presentation.