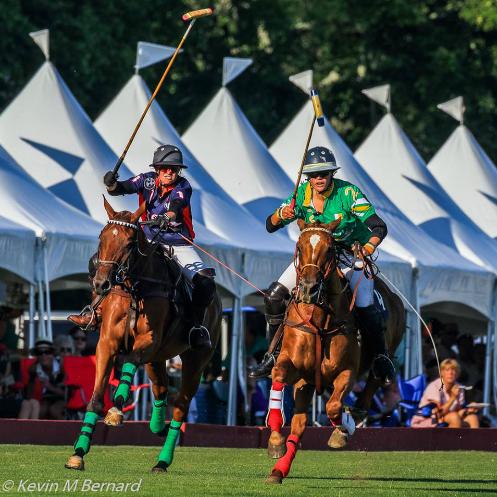 The Newport International Polo Series XXV featured USA vs. Ireland at 5pm on July 23th. Get additional match info via private email subscription, including a Game day Scorecard (sign up) and the weekly Emagazine (sign up).

Team USA took to the field for a historic showdown against Ireland on July 28th. This show-down is one of the most popular matches because of team USA's 25 year old rivalry with Ireland. The stands were overflowing and the lawn was buzzing; the entire match was one filled with energy and excitment.

Playing for Newport in the first spot was Heather Souto, in the second spot was Chip Stiegler, in the third spot was Dan Keating and in the fourth spot was Jim DeAngelis.

Playing for Ireland in the first spot was Willie Clare, in the second spot was Siobhan Herbst, in the third spot was Colm Kelleher, and in the fourth spot was Denis Connolly.

USA took the lead during the first Chukka with both Stiegler and DeAngelis scoring two goals each for USA. Also during the first Chukka Herbst and Kelleher scored a point each for Ireland. During the second Chukka Heather Souto scored a point for USA which was met with two goals from Ireland's Colm Kelleher. However, before the Chukka ended USA's DeAngelis scored two more points ending the Chukka 7 to 4, USA.

The third Chukka was rough for team USA; they fought hard but were unable to score a single goal and even let Ireland's Denis Connolly score one. The fourth Chukka, USA got back on track scoring 4 points in total (Souto 1, Steigler 1, DeAngelis 2) while Ireland only scored two (Herbst, Connolly). During the fifth Chukka, the two teams matched each other goal for goal with USA scoring two (Souto, Stiegler) and Ireland scoring two (Clare, Herbst). However, these two goals were not enough to keep Ireland afloat as they headed into the final Chukka. With a four point lead, USA scored five more points (4 Souto, 1 Keating) while Ireland only scored one (Kelleher). It was a riviting match but one that ended with Irelands defeat. The final score was 18 to 10, USA.

During the match, a weekly door prize drawing and the Best Tailgate were awarded.  Following the match, the USA vs. Ireland perpetual cup was presented to the teams by Sean McKenna from Cox, during the Veuve Clicquot Champagne Toast and Trophy Presentation. as well as an autograph signing and cocktail hour to mingle with the players.