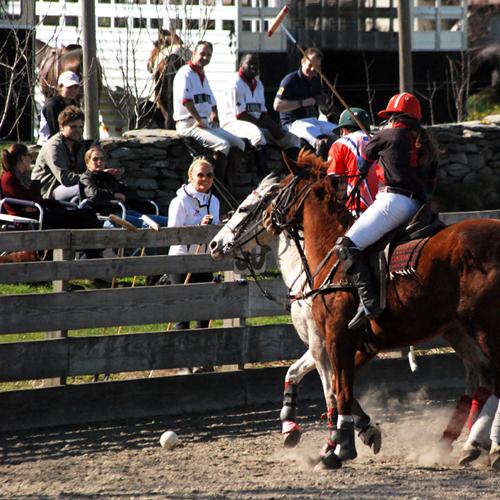 Newport Polo’s Spring Fling on April 24 brought out four regional teams for the Sunday afternoon arena polo challenge. In a round robin format, each team faced the other in seven minute chukkers to determine advancement to the finals. The evenly matched teams had no margin for error if they were to make it to the Final round.

Teams A & B started off the day’s action to open the tournament, and a string of dead heats.  Team A took the early lead with a goal by Cranmer, followed quickly by Buchanan, but Stanton for Team B leveled the odds, ending the chukker in a 2-all tie.

Teams B & C went tit for tat in chukker 2 as Keating and Sustaita started a running duel for control of the play. Keating drew first blood for team C, Sustaita fired back, but Keating kept cool and sunk another goal. Unsatisfied, Sustaita finished the chukker with another goal for team B in a 2-all tie.

Ready to take on the next challenger, team C stayed in the arena for the 3rd chukker match up against team A. This time King came out swinging for team C, but team A’s heavy hitter, Cranmer deftly matched King’s goal. The pair continued to tango as King lobbed another goal for team C, and Cranmer returned the favor. The final score when the buzzer sounded was, of course, a 2-all tie.

Halfway through the qualifiers, the players had to turn up the heat to make it to the final round. Teams B & D returned to the pitch, eager to break the standing stalemate. Susaita was ready at bat, driving home a goal for team D, followed with another from Iddrissu. Clemens got team B on the board, but a costly penalty converted by Iddrissu clinched the first win, 3 – 1, for team D.

With one win under their belt, team D was looking to cement its place in the finals playing their last qualifying chukker against team A. Cranmer for team A had other plans, earning the first goal of the chukker. Iddrissu evened the score, but team A was determined, and after another goal by Cranmer, team A took the lead 2 – 1 and to run out the winners.

As the last chance for advancement teams B & C lined up for the 6th chukker throw-in. Keating controlled the first half of the period for team C with 3 successful runs on goal. Clemens righted the ship for team B, adding their first goal to the board, and a helpful pony added a second, but a strong defense by team C ended the chukker in their favor, 3 – 2.

Based on the win, loss and tie record, teams B & D would play the consolation round while teams A & C advanced to the finals.

It was A strong showing from team B and Clemens that ended the consolation round in a 3-0 closeout. With such closely competitive teams, the finals proved to be the high-scoring match of the day. Team A came out with the lead thanks to a goal by King, followed by a swift penalty conversion plus two goals during regulation play from Keating. Spurred on by the 4 – 0 lead, team A’s Cranmer recovered two goals, but with the seconds winding down, Brian McCormick, Alexander King, and Dan Keating won the day in a 4-2 victory over team A.