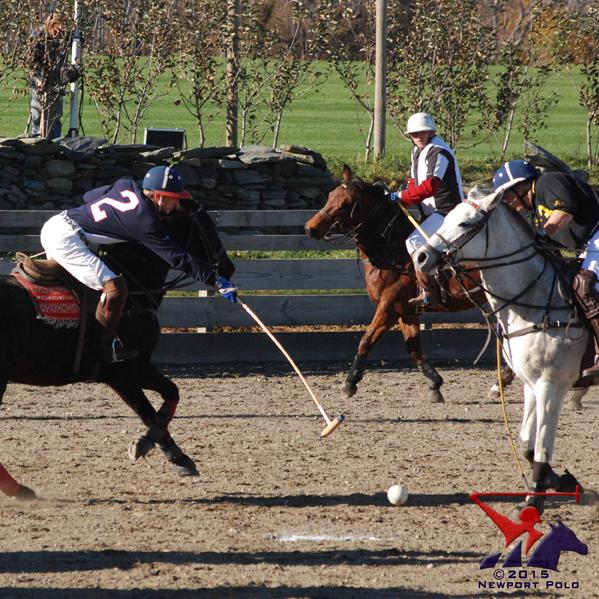 The annual 'Turkey or Stuffing' holiday tournament kicked off a great weekend of polo on Nov. 27 & 29, an unseasonably warm weekend, combining veteran players & coaches, Newport Polo Club members, Brown varsity players and advanced polo students for a great competitive polo experience. The first day was no turkey shoot with two closely contested 4-chukker matches in the tournament's initial round on Friday. The Consolation match and Finals concluded on Sunday.

Game One: Expats Amy Dolan, Janie Amero and Jonathan Willen (in red) faced off against CT's Patrick Rosanelli, Julie DeAngelis and Jim DeAngelis (in black) in the opening round.  CT took a 5-4 lead after the first period but Expats rallied back in the second period to take the lead 8-6 at the half.  Expats outpaced CT in the third chukker, for a 12-8 lead.  CT outscored Expats in the fourth period, but fell short 15-12.  Expats head to the Finals.

Game Two: RI's Stefanie Boyer, Minnie Keating and Dan Keating (in red) took on MA's Brian McCormick, Sam Clemens and Alexander King (Navy).  RI put up 3 points to MA's 1 in the first chukker.  The teams were equally matched in the second, with an interchanging volley of 3 goals apiece, for a 6-4 RI lead at the half.  MA outscored RI in the third period, closing in, 9-8.  RI had the stronger finish in the fourth, 4 goals to 2, for a 13-10 ticket to the Finals.

Consolation Round: MA vs. CT - Like the tortoise and the hare, CT had a speedy start with 4 points in the first chukker and 9 in the second chukker, while MA came out of hibernation in the second chukker with 2 goals for a 13-2 stunner at the half.  Then MA outscored CT in the third period, 4 goals to 3, and in the fourth, the teams were equally matched with 3 goals apiece, nonetheless CT rode out the winner, 19-9.

Final: RI vs. Expats - Another highscoring game opened with 7 points for the Expats to 3 for RI in the first chukker.  Defensive strategies ensued for the second period to foil the attacks, but the Expats managed 3 more points for a 10-3 lead at the half.  The second half was a stalemate on paper, but wildly unpredictable as it played out, with 6 back and forth goals in the third chukker and more of the same in the fourth chukker, but Expats early lead held up for a 16-9 claim to the silver.