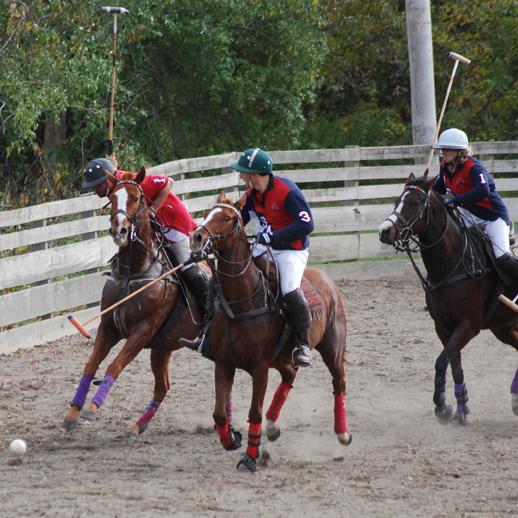 Newport Polo’s summer season transitioned into Autumn arena polo in October with mild temperatures and ideal conditions for veteran & guest players to enjoy recreational play, and new players to get in on the action, while our college and high-school teams ramped up to competition form.

A series of Adult Intro Clinics created a fun atmosphere for beginners to feel comfortable trying their hand at the game.  Dozens of hopeful adult candidates started with horsemanship basics on the ground, and found themselves after an hour, in mounted scrimmage with their new-found skills.

October’s activities reached their peak with the annual Players Dinner and Tournament, bringing to a culmination a 24th season of participation in the Newport International Polo Series.  The weekend's events began on Saturday, October 24th as four teams competed in intense opening round action.  Club members, sponsors, and supporters gathered that evening at the Clarke Cooke House for the Players Dinner where the 2015 awards for Sportsmanship and Most Improve Player were announced, along with recognition of top polo leaders and supporters for the year.  The teams reconvened on Sunday for two closely contested matches in the consolation and final rounds of the tournament.

Brown University hosted Skidmore College for its home opener, on October 4th, continuing with road games at Harvard and Skidmore, and upcoming home game on November 14th against Princeton.  Finally, the interscholastic team had an auspicious start to the season with a home game victory against its Boston rival on November 8th, to avenge their upset by Boston at last year’s Northeast Preliminary Tournament.

Special Offers: New players can get deep in the saddle with an arena season package.  The Deep Six Pack includes six lessons, plus two bonus lessons free for a consistent, results-oriented improvement strategy to advance to competition play.  Current students can score their own hat trick with the ‘bring a friend, get a cap’ offer now through December.

Polo continues through December with weekly lessons, weekend competition chukkers for players, practices & scrimmages for the interscholastic and intercollegiate teams, plus the upcoming Thanksgiving Tournament.  After the winter recess, arena polo resumes with the 12 week Spring season through May.  Click here for more on playing at Newport Polo.