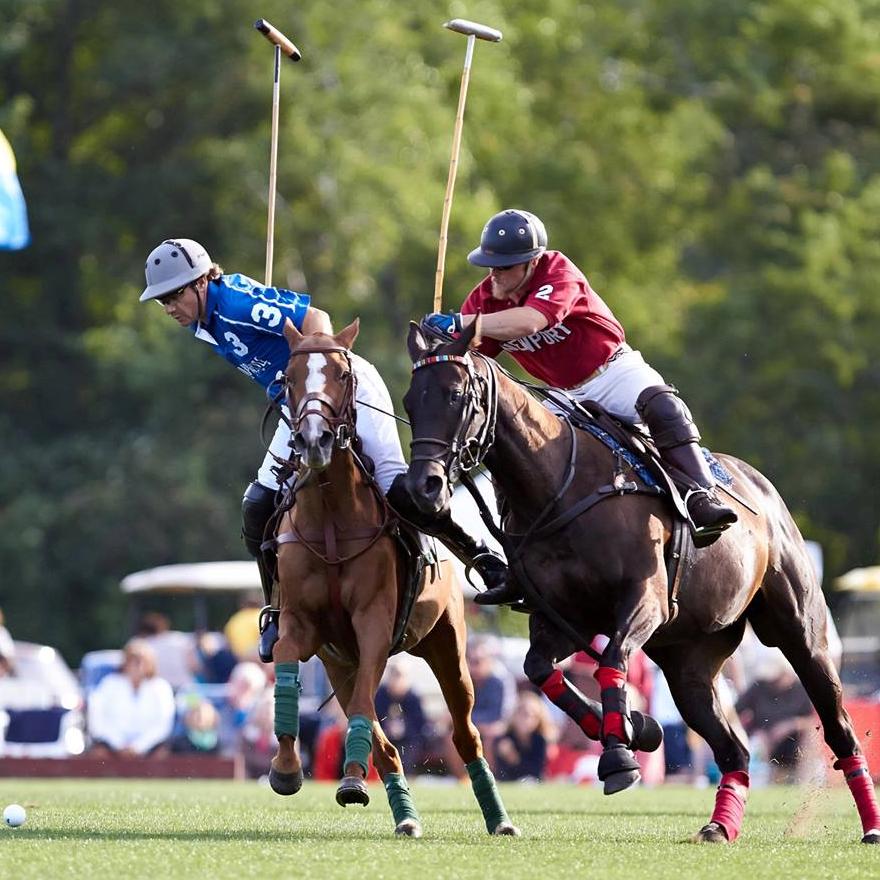 Newport handily defeated its challengers from Philadelphia 13-9 in regulation play on Saturday, August 15, 2015 at 5p.m. in the Newport International Polo Series, presented by your Rhode Island BMW Centers.  Philadelphia has been a consistent threat in the lineup of US city rivals competing in six-chukker matches against the home team, Newport.

Playing for Philadelphia were Jim Stanton at #1, Christophe Gerberding at #2, Juan Vidal at #3 and Estani Puch at #4.  Newport fielded Charlie Bullis at #1, Sam Clemens at #2, Jonathan Willen at #3 and Dan Keating at #4.

Entertaining a capacity audience in the Positive Energy Polo Lounge, created in the Alex and Ani Pavilion for the City Series matches with all-inclusive premium seating, was a special mini summer fashion show by Angela Moore before the umpires bowled in the ball to start play.

Newport's Bullis and Keating (2) gave the hometeam an early lead, matched with a single point by Vidal for a 3-1 score at the bell.  Keating was on fire, adding 2 more points, along with teammate Clemens for a goal, leaving Philadelphia silent as the gap widened to 6-1.  Philadelphia rallied back with 2 goals by Puch in the third chukker, but Newport matched them point for point, courtesy of Willen, Bullis and Keating for a 9-3 tally at halftime.

Puch kept Philly alive in the fourth period with a goal, but Newport's Clemens and Keating were unrelenting with a point each, for 11-4 score.  The tide turned in the fifth chukker when Philly delivered 3 goals by Stanton and Puch (2), while Newport's Willen was the only goal scorer of the period from the home team, narrowing the lead to 12-7.  In the sixth chukker, Philadelphia gave a last push with two more points by Puch, but Keating padded Newport's lead with another goal for the 13-9 final score and victory, avenging last year's loss.

During the match, a weekly door prize drawing from Rockport awarded a lucky winner from Massachusetts a pair of Rockport shoes, and winners of the Best Tailgate judging received a Tailgate Trunk from Stella Artois.

After 6 periods, the match concluded with the Veuve Clicquot Champagne Toast & Trophy Presentation, presented by Chris Anderson, Regional Property Manager from Balfour Beatty Communities, and by Tom Maxfield, Community Manager, and autograph signing and cocktail hour to mingle with the players.