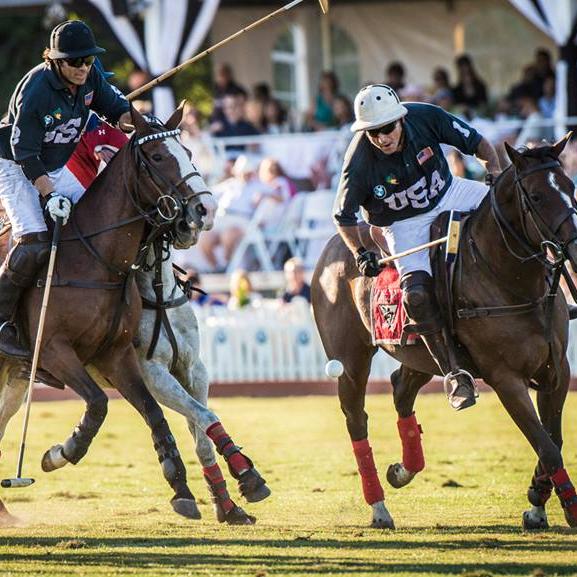 USA sent the Brits sailing home empty-handed on Saturday, September 5 using an unexpected advantage of dry fields and sunny skies, unfamiliar conditions to the visitors from the typically rainy isle.

BMW organized the pre-match activities, with a selection of 2015 models from your Rhode Island BMW centers displayed for test drives.

Heading the British forces were Stephen O Kane at 1, Simon Chamberlain at 2, Omar Mangalji at 3, and chairman of the International Federation of Polo, Nicholas Colquhoun-Denvers was man at back in 4.

England fired the opening volley as Mangalji drove home the first goal. USA quickly made it to muster, with a retaliatory goal by Clemens. But the skirmish wasn’t over as Chamberlain saw through another British goal to end the chukker. The second skirmish was a draw as Steigler tied the score at 2, while USA’s line held against the Brits, ending the chukker at 2 all. Colquhoun-Denvers outflanked USA twice in the third chukker, raising the British score to 4. The umpires moderating the civilized dual awarded a penalty to USA which Clemens skillfully converted to a goal, ending the first half 4 – 3 in favor of England.

The second half began the USA charge to victory as Clemens, followed by Nseir added two more points to the USA score, while the English team seemed to have stayed in the barracks after half-time. The fifth chukker saw a building advance for USA as only Clemens drew a penalty, converted to goal for a 6 – 4 USA lead. Mangalji tried his fast goal tactic seen in the match opening, which brought England up to 5 goals. It was not enough as Friedman, Nseir, and Clemens unleashed a relentless charge for USA, doubling the English score, and ending the match in a 10 – 5 victory.

During the match, one lucky fan hailing from Marietta Georgia won a new pair of shoes in the weekly door prize drawing from Rockport. British nobility could not be beat in the Best Tailgate contest, as a table in the Pavilion complete with typically British treats, a model MG & their guest of honor won the picnic trunk from Stella Artois.

After 6 periods, the match concluded with the Veuve Clicquot Champagne Toast & Trophy Presentation, presented by Geordie & Heather Shaver from Newport J House. Best Playing Pony honors went to Dan Keating's Persia.  Sam Clemens was celebrated as the high scorer of the match with a total of 5 goals, scoring half the points for Team USA. A cocktail hour to mingle with the players ended the balmy evening on a high note.

During their visit, the English team enjoyed America's Cup Charter sailing, paddle boarding - courtesy of Island Surf & Sport , tennis at the International Tennis Hall of Fame, helicopter tours with Bird's Eye View Helicopter Tours, Newport Mansion tours and a team dinner at the one and only Clarke Cooke House for a truly memorable visit to the City by the Sea.