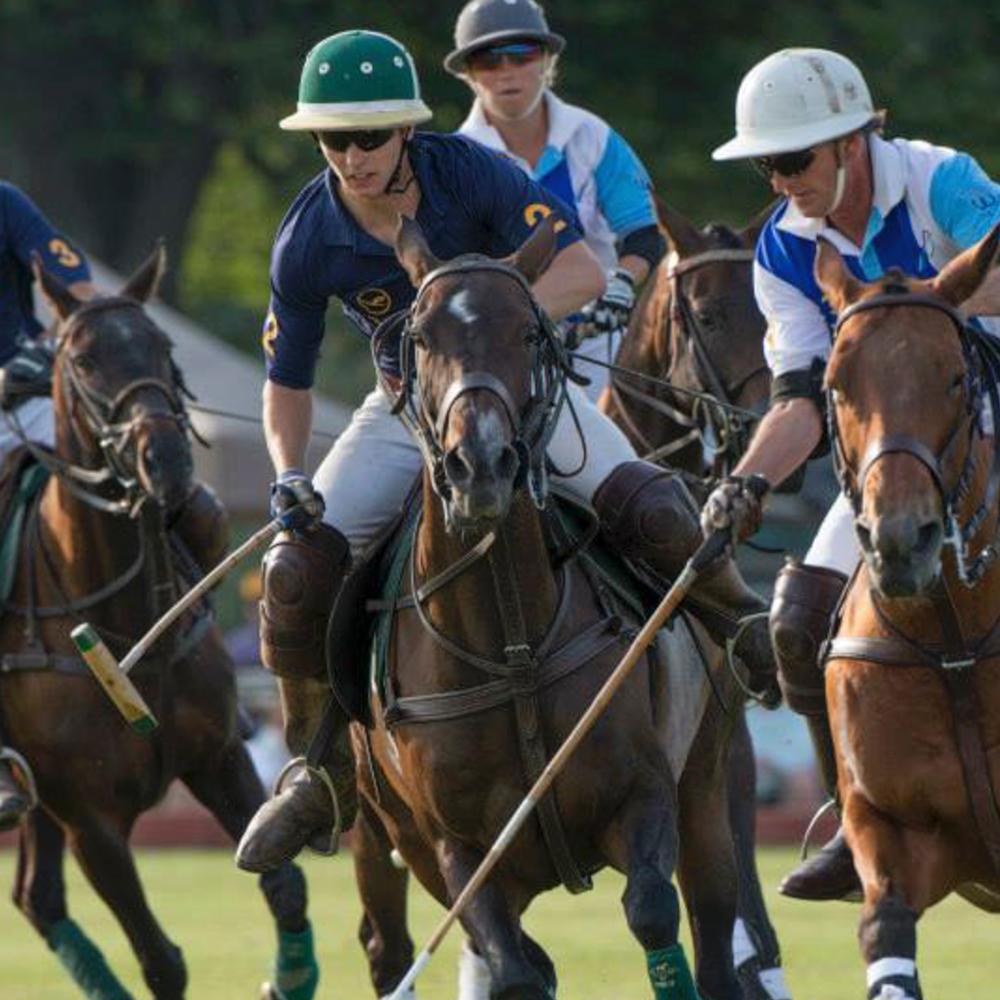 The summer sun was in full shine Saturday, June 13th for the Newport Cup, an annually anticipates dual between the youngest and most senior members of the Newport Polo Club who face off in a classic six-chukker match in the NBC-10 Newport International Polo Series, Presented by your Rhode Island BMW Centers. Young Newport showed their mettle, claiming the Newport Cup for the second year in a row, ending the match with a close score of 13 to 10.

Playing for Newport was Dave Bullis at #1, Michel Nseir in the #2 position, Jim DeAngelis at #3, and Peter Friedman at #4. Representing Young Newport was Jonathan Willen at #1, Charlie Bullis at #2, Minnie Keating at #3, and Sam Shore in the #4 positing.

Both teams regrouped at half-time, and Newport came out ready (and still elderly) with two goals in the fourth chukker by D. Bullis and DeAngelis. Young Newport was right behind them with two points by Willen and C. Bullis. DeAngelis made up ground with another two goals for Newport, but C. Bullis and Shore matched them as the bell sounded to end the fifth chukker. The sixth and final chukker was another two-goal tie with D. Bullis and Friedman for Newport, and Willen and Keating for Young Newport. The annual duel ended with the youngins' reclaiming the Newport Cup for a final score of 13 to 10.

One lucky spectator was awarded the weekly door prize from Rockport, and tailgaters in space 10 caught the judge's eye, taking home the picnic trunk from Stella Artois.  The 2-hour match concluded with the Veuve Clicquot Champagne Toast & Trophy presentation of the Newport Cup, autograph signing and cocktail hour to mingle with the players.

The Newport Cup match was sponsored by Atria Senior Living. Offering independent living, assisted living and memory care in four area locations, Atria Senior Living is home to more than 400 of Rhode Island’s wisest older adults. Atria creates vibrant residential communities where seniors can thrive and participate, know their contributions are valued, and enjoy access to opportunities and support that help them keep making a difference in our world. Learn more at www.atriaseniorliving.com.

Minutes from downtown Newport, the International Polo Grounds are located at historic Glen Farm, 715 East Main Road (Rte. 138) in Portsmouth.   This bucolic setting is the last 100 acres of what was once a 700-acre manorial farm whose settlement dates back to the 1600's. Its classical stone barns from the Gilded Age and its park-like grounds were rehabilitated by Keating, and thrive today as an equestrian & community recreational property, and home of the Polo Series.

Discover Polo!  Watch it, Play it, Support it.   Newport Polo hosts the Newport International Polo Series XXIV, and is the home of America's first polo club, est. in 1876, (a founding member of the United States Polo Association offering public exhibition matches, polo club member services for grass & arena polo, and polo instruction year-round.  Information about Newport Polo's spectator events, polo lessons, and sponsorship can be found on these web pages, using the links at the top of this page, including About Newport Polo.