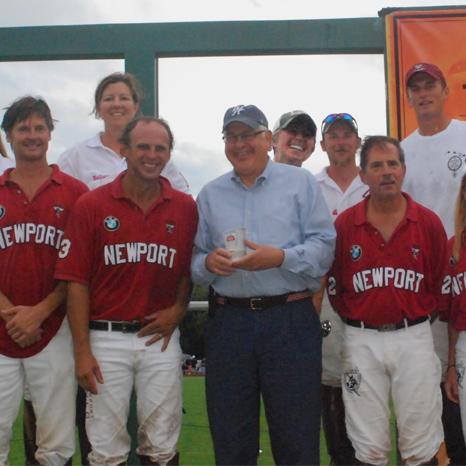 Newport Polo’s young generation and veteran members starred in a late season re-match on Saturday, September 12th at 4pm in the NBC-10 Newport International Polo Series, presented by your Rhode Island BMW Centers. The vigor and stamina of the young generation withstood the cunning and skill of the veterans for an 11-8 repeat victory.

The senior players wore the home team red, with Amy Rice playing the forward offense at #1. Peter Friedman played mid-field offense at #2. Dan Keating took the captain’s seat at #3, and Dave Bullis was the team’s defense at #4.

Bridget Torrey at #1 led the young generation, with Heather Souto at #2, Jonathan Willen in the captain’s position at #3, and Sam Shore playing defense at #4.

The veteran’s skill took the young generation by storm in the opening chukkers as the team grabbed an early lead with fast goals by Friedman and Rice. After a few false starts, Shore was able to get around the veteran’s defense and send a straight shot through goal, ending the chukker 2-1. It was the Veteran’s cunning dominating the second chukker again as Friedman brought the thunder, followed up by a goal from Keating. Friedman ended the chukker with an under-the-neck shot at a near impossible angle, widening the veteran’s lead 5 – 1. Newport’s young generation found a chink in the veteran’s armor, with Shore turning the tables in the third, carrying the ball down-field and through the veteran’s goal. Willen joined the charge on the veterans for another goal to end the first half 5 – 3 for the veterans.

The upstarts really began to shine in the fourth as Willen and Shore once again outran the veteran players for three more young generation goals. Newport’s veterans, with a second wind, opened the fifth with a goal by Keating. Willen matched the veteran’s goal and the young generation got their own infusion of energy as Janie Amero made her debut on the international field, replacing Bridget Torrey who was sidelined with a minor injury. Bullis gained more ground for the veterans, but Willen and the reinvigorated young generation made two more goals for a 9 – 7 lead. Bullis started the final chukker with a veteran goal, but Amero returned the favor, followed by Shore, taking the match for the young generation, 11 – 8.

During the match, one lucky fan hailing from Jamestown, RI won a new pair of shoes in the weekly door prize drawing from Rockport. Tailgate 63, decked out in home team red from their decorations & attire to crimson roses on the buffet, won the Best Tailgate prize from Stella Artois.

After 6 periods, the match concluded with the Veuve Clicquot Champagne Toast & Trophy Presentation, presented by Chuck Borkoski, representing Stella Artois. A cocktail hour to mingle with the players ended the mild September evening on a high note.

“Our sponsors have been with us since the beginning. Without their support, the Series would not be as extensive as it is,” explains Dan Keating, Polo Series founder. Discover Polo! Watch it, Play it, Support it. Newport Polo hosts the Newport International Polo Series XXIII, and is the home of America's first polo club, est. in 1876, (a founding member of the United States Polo Association) offering public exhibition matches, polo club member services for grass & arena polo, and polo instruction year-round.  Information about Newport Polo's spectator events, polo lessons, and sponsorship can be found on these web pages, using the links including About Newport Polo.