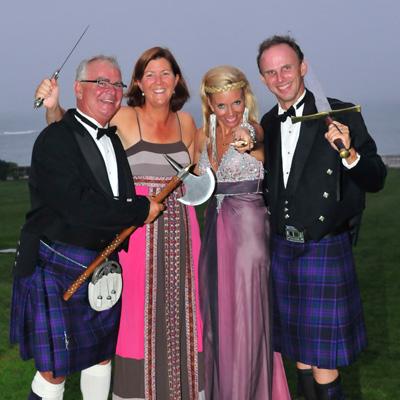 Chock full of Scottish influence, from kilts and bagpipers to Burnin’ Love, the 2012 International Polo Charity Ball rocked the house at Rosecliff with nearly 300 strong, raising over $17,500 for Star Kids Scholarship Program.  Dubbed theBraveheart Ball, the black tie gala fêted guests of honor, the Scottish Polo Team and celebrated and all things noble and Scottish, attracting Scots & enthusiasts from across the US.

The evening began with a reception for nearly 200 dinner guests clad in Scottish Highland formal dress on the terrace, to indulge in sumptuous hors d'oeuvres and libations. Cocktail Gurus, Jonathan & Jeffrey Pogash poured an exclusive collection of fine classic malt scotches, courtesy of Providence Beverage Co., to encourage the bidding on auction items and enhance the colors of the sunset on the waves of the Rhode Island Sound in the distance.

A seated gourmet dinner in the gilded ballroom followed, where Sotheby's auctioneer Hugh Hildesley enchanted the audience to indulge upon luxury packages reserved for live bidding. Blackstone Catering did not disappoint with their creation of a Scottish menu from venison and duck to grilled Angus beef tenderloin and horseradish crusted salmon, and let’s not forget the whip crème layered cranachan.

Scotland’s most famous export, Elvis Presley (impersonated by Disney’s Scot Bruce) broke open the dance floor after dinner when an additional 100 guests arrived for a dessert buffet, cocktails, and dancing. The packed ballroom gyrated til the stroke of midnight when the party moved on to fill the Sky Bar at the Clarke Cooke House.

Though hotly disputed, the best kilt (not necessarily the most stylish but the most salivatory) was a lobster-adorned original worn by Patrick Descocio, and close seconds were NYC’s Geoffrey Scott Carol and Geoffrey Day, dressed to kilt as ever. Stacie Mills ushered in a fancy Newport posse, while Peter Rains played pied piper to the Pam Beach crowd.  Other familiar faces in the crowd were polo sideliners Lois Kessler, Tabitha & Blair MacKenzie, Celeste & Ray Noreau, Patrick Jardon, the Skiffingtons and the Davises, Kate & Mike Water’s court, and a whole gaggle of Bostonites including Joshua Hebert who flew down on Magellan Jets.  There were Flemings and Perkins and Sanders and Stansfields, and omnipresent committee members Kathleen Burke, Susie Hill, and Lori Hogan.

Bursting with polo players, male and female, the gala was hosted by the Newport Polo Club and gala Ambassadors Marianne and Leonard Nihan, and the evenings’ silent & live auction, chaired by Bridget Torrey, benefitted Star Kids Scholarship Program of Rhode Island, to invest in the next generation, one kid at a time. A portion of the money was raised through pledges for a memorial scholarship fund initiated by members of the Newport Polo Club in memory of late member Dennis Mikolich.  For more info, visit http://www.starkidsprogram.org.

The gala took place at Rosecliff, 548 Bellevue Avenue in Newport, the premier estate amidst America’s finest collection of gilded age mansions. Commissioned by Nevada silver heiress Theresa Fair Oelrichs in 1899, architect Stanford White modeled Rosecliff after the Grand Trianon, the garden retreat of French kings at Versailles. After the house was completed in 1902, at a reported cost of $2.5 million, Mrs. Oelrichs hosted fabulous entertainments here, including a fairy tale dinner and a party featuring famed magician Harry Houdini.