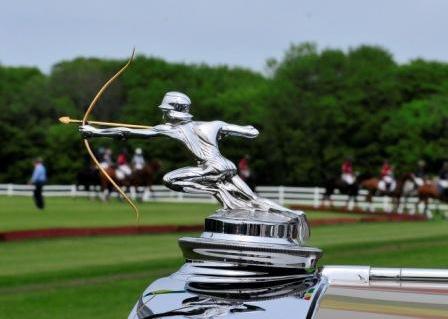 Saturday’s road tour of the 5th annual Newport Concours d 'Elegance made a stop at the polo grounds at Glen Farm in Portsmouth, home of the Newport International Polo Series, to christen to the 2010 polo season. An exhibition of the sport took place with a backdrop of 26 international flags flapping heralding the arrival of challengers from around the world this summer, and a handsome collection of tailgaters in the finest fashion and cutting-edge coachwork & design of historic and significant automobiles.

This confluence of horsepower presented a sneak peak at the 50 or more rare automobiles that descended upon Newport for the weekend, as well as the magnificently athletic and fit thoroughbred polo ponies and the skilled horsemanship of their riders demonstrating the finer points of the game of polo, which first took root on American soil in Newport more than 130 years ago, in the same opulent era that the first American Concourse d ‘Elegance originated in Newport.

“The afternoon is the classic time and place to start the ‘AmericanSummer Experience’”, explains Mark Hurwitz, President of Newport Concours d ‘Elegance, who adds, “It is again the definitive weekend event for connoisseurs of classic automobiles, fine art, splendid fare, and charitable giving, supporting 'Autism Speaks', 'The Boys & Girls Club of Newport County' and 'The Collectors Foundation'”.

The 19th season of the Newport International Polo Series officially gets underway on Saturday, June 5, 2010 at 5pm with USA vs. the Dominican Republic, making its debut in the Polo Series.  The Polo Series will continue every Saturday thereafter through September on the polo grounds of Glen Farm in Portsmouth. This year the Polo Series will feature returning international teams including France, Scotland, Ireland, Australia, Jamaica, England, while the Netherlands and the Dominican Republic will make debut appearances. The Australian team will be the guests of honor at the International Polo Charity Ball.  For more information, call 401-846-0200.